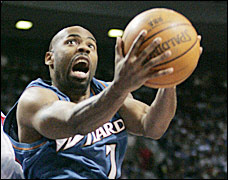 (Boulder-CO) The murky point guard situation in the Mile High City is starting to clear up with the expected arrival of eight year veteran Chucky Atkins. The Rocky Mountain News is reporting that Atkins will be in Denver sometime today to sign a two-year, three million dollar per year deal with an option for a third. This pending deal also pretty much punches Steve Blake’s ticket for another NBA city.
Atkins is coming off of a season with the Grizzlies where the team struggled every night, but one where he had a solid year. Atkins averaged 13.2 points and a career-high 4.6 assists for Memphis. Chucky also shot a relatively efficient 37% from behind the three-point line, which is probably why he is receiving the nod from Nuggets management over other rumored point guards such as Brevin Knight of the Charlotte Bobcats or Jason Hart of the Clippers.
My feelings on the pending move are mixed for a couple of different reasons. First off, I do believe that Atkins’s veteran leadership is a solid up-grade from Steve Blake’s relatively new found role as a starter. Chucky has played on some very good teams throughout his career and has been a solid contributor despite not always being the starter for his ball club at the time. Another reason to applaud the pending signing is Atkins shooting. It is no secret that the Nuggets need a legitimate three-point threat that doesn’t put them at a disadvantage on the other end and I think that Chucky does that for this team. His career connection rate from beyond the arch is 37% which makes him by far the best threat from downtown that the Nuggets will have next season.
On the other hand…
I’m not so sure that Atkins is the kind of point guard that can really thrive in Denver’s up-tempo kind of pace. If memory serves me correct, Chucky is a guard that is more suited to playing in a slower, half-court, style of play. Not to say that Denver couldn’t use to improve in this facet of the game, but I’m not sure if their game plan in the immediate future is to slow things down too much. We’ll have to wait and see on that one.
But I do know this much…
The signing of Chucky Atkins is going to greatly alleviate some of the luxury tax pain Nuggets owner Stan Kroenke was going to be feeling come next October. Steve Blake is probably going to get his desired $5.5-6 million per year contract and had the Nuggets signed such a deal they would have been getting far worse of a shake than Atkins will give them. So, overall I give this move a thumbs up because the positives far outweigh the negatives.
Posted by Nugg Doctor at 8:35 AM