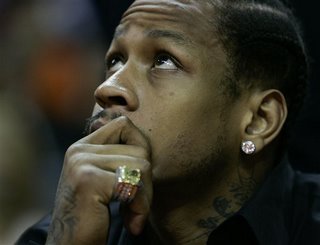 (FortCollins-CO) The Denver Nuggets rumor mill could be one of the most buzz worthy in the entire league. The buzz currently is surrounding a potential deal with the Philadelphia 76ers that would include shipment of their aging superstar Allen Iverson. In reciprocal fashion, The Nuggets would give up Andre Miller and Kenyon Martin. I absolutely love the possibilities of this trade and I'm going to tell you why.

First and foremost, Kenyon Martin has an estimated 70 million dollars on the Nuggets books over the next few years. He is obviously not happy in Denver and either is Nuggets management. He is the hottest trade commodity the Nuggets have and the most in need of departure.

Allen Iverson has an estimated 60 million dollars in salary left with the 76ers. With Andre Miller potentially making the move to the east coast, the 76ers would be able to free up enough salary to pay 'Dre while Kenyon Martin fills their financial void that Iverson is currently occupying.

This trade would take some finesse, but is more than possible!

I think that Allen Iverson is at a point in his career where he is ready to be on a legitimate contender and if that means not making the high profile salary he has grown used to than so be it. It has been a struggle for him since their last Finals appearance and I think he is ready to forget about ego and try to put some rings on those fingers. With Iverson, the Nuggets can sign Carmelo to max money and keep some of the perimeter double teaming to a minimum. This loosens up Anthony to be a technician from 17 feet and gives the Nuggets some offensive help on the three point arch. Not to mention that Allen Iverson is an elite player on almost every other facet of the game as well.

Great article, and I'm not quite ready to dream about AI coming here, but it is interesting...

Here's the details I found:

Interesting Nuggetshoops... Where did you find that information? The source I'm consulting, www.hoopshype.com, lists Andre Miller's salary for 2005-2006 at 8.1 million and then doesn't list any for future seasons. I took this as a sign that his contract was expired.

AI would be nice.

But if this is only a pipe dream, what about these guys to trade for Kenyon and/or Andre?

Michael Redd or Mike Miller(Memphis),Mike James (Toronto), or Jason Terry (Dallas) all shoot over .400 from 3-pt. range. Except Redd he shot .395 but shot .467 in this years playoffs.

I will look into the possibility of all these guys ending up with the Nuggets. As always, Thanks for reading!