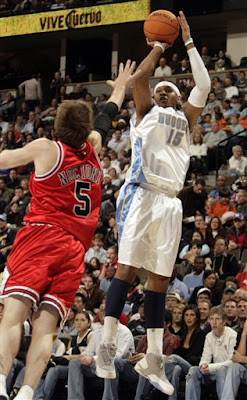 (Boulder-CO) www.espn.com is reporting that Carmelo Anthony has been named to the All-NBA third team along side Dwayne Wade, Chauncey Billups, Kevin Garnett, and Dwight Howard.
Carmelo had his best season statistically with averages of 28.9 points (a career-high), 3.8 assists (also a career-high), and 6 rebounds (tying a career-high), but what I think was the most drastic change in Carmelo’s game was the cerebralness of which he played with without the ball. ‘Melo is understanding that his movement away from the action is just as critical to getting open shots as is being able to take his man off the dribble and his scoring average proved just that. He also noticeably raised his game on the defensive end of the floor, made smarter decisions with the ball, and despite being suspended for 15 games led the league in scoring for 75% of the regular season.
This is the second time in Anthony’s four-year career that he has been named to the All-NBA third team and caps off a season where he made his first All-Star appearance. Carmelo also recorded his first triple-double of his career to go along nicely with five double-doubles of which all came after the month of February.

Congratulations to Carmelo Anthony on a great season!
Posted by Nugg Doctor at 6:31 AM

One interesting fact: the entire first team is from the Western Conference.