The Trailblazers are Lucky 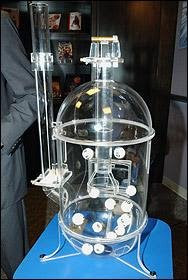 (Boulder-CO) The Portland Trailblazers and their fans are some of the luckiest folks on the entire planet. They entered last night’s NBA Lottery with a 5% chance of landing the overall number one pick and somehow, some way landed the rights to pick either Kevin Durant or Greg Oden in just over a month in the NBA draft. So much for tanking games to try and pad the chances of having your team called in the top three, huh Boston and Memphis? Jerry West can belly ache all he wants, but the bottom line is this: The lottery is completely random. The system is not flawed. And to be quite honest with you, it worked its way out in a very ironically fair manner. You tank, and you get punished for doing so (I love it)! I guess the only thing to say is congratulations, oh, and don’t blow it and end up picking the next Sam Bowie…
Here is how last night’s lottery played out.
1. Portland
2. Seattle
3. Atlanta
4. Memphis
5. Boston
6. Milwaukee
7. Minnesota
8. Charlotte
9. Chicago (via New York)
10 Sacramento
11. Atlanta (via Indiana)
12. Philadelphia
13. New Orleans
14. L.A. Clippers
15. Detroit (via Orlando)
16. Washington
17. New Jersey
18. Golden State
19. L.A. Lakers
20. Miami
21. Philadelphia (via Denver)
22. Charlotte (via Toronto through Cleveland)
23. New York (via Chicago)
24. Phoenix (via Cleveland through Boston)
25. Utah 26. Houston
27. Detroit
28. San Antonio
29. Phoenix
30. Philadelphia (via Dallas through Denver and Golden State)
Posted by Nugg Doctor at 7:18 AM