Nuggets Drop Warriors in a Thriller 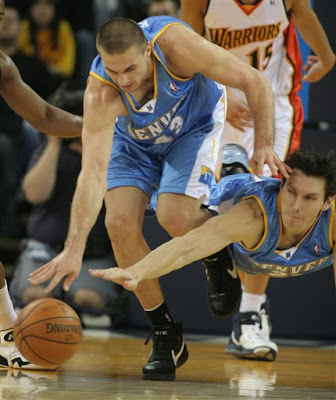 (AP Photo/George Nikitin)
(Boulder-CO) I told you this one was going to be a rubbernecking affair! The Nuggets outlasted the Golden State Warriors, 124-120, by doing the little things right down the stretch. Guys like Anthony Carter rebounding amongst the trees late in the game, Linas Kleiza stepping up in the third quarter when Carmelo went to the bench with foul trouble, and an impressive collective effort by all the Nuggets from the free-throw line is why the Mile High City sleeps well tonight.
In the first half the Nuggets looked sharp. Despite allowing the Warriors to score 64 points (including seven three-pointers), Denver did exactly what I prescribed and shot a high percentage by connecting on 28 of 47 shot attempts to finish the first 24 minutes with a 59% clip from the field. Denver countered Golden State’s 64 with 71 points of their own with Carmelo Anthony leading the way with 24 points and five rebounds. The Nuggets also received a big shot in the arm from their bench which outscored the Warrior reserves, 19-15, in the half led by Chucky Atkins and J.R. Smiths’ six points a piece.
In the third quarter, the Golden State Warriors made me wonder if they would ever miss from downtown as they hit five three-pointers including a 30-foot bomb at the buzzer by Stephen Jackson who accounted for three of the aforementioned five. But, the counter punch for the Nuggets against the trey ball of Golden State was Linas Kleiza. With Carmelo Anthony on the bench with his fourth foul at the six minute mark, Linas came in and scored the final eleven Denver points in the quarter to preserve the Nuggets five-point lead heading into the fourth. In fact, including Kleiza’s final eleven, he and AI scored 21 of the Nuggets 31 points in the third.
And that’s right about the time that Golden State’s golden touch from long distance faded.
The Warriors were 12 of 26 with the long ball entering the final quarter, but lost their legs in the fourth and made only 2 of 10 attempts from the land of plenty when they needed them the most. On the flip side to Golden State’s shooting woes was the perseverance the Nuggets demonstrated at the free-throw line. Denver made good on 14 of their 16 opportunities at the charity stripe in the money period and outlasted the Warriors down the stretch in front of more than 20,000 once rabid and now stunned Golden State fans.
It’s hard to say that one Nugget effort was bigger than another in this game because everyone did so much, but if I had to give out a game ball it would have to go to Allen Iverson. AI was the true warrior of tonight’s game by scoring a game-high 39 points and dishing six assists. His confidence was unshakeable. Whether they tried to sic Baron Davis on him to match his speed or Matt Barnes to try and bother him with length, AI showed everyone that he fears no man. Iverson attacked the basket like a man possessed and when he wasn’t wetting jumpers in helpless defenders’ faces he was clutch from the free-throw line finishing, 13-15.
But luckily for AI, he wasn’t the only Nugget with the eye of the tiger.
Carmelo Anthony (despite battling home cooking all night long by the men with whistles) finished tonight’s game with 30 points and eight rebounds as he too was a fantastic 8-8 from the free-throw line. Marcus Camby added 15 points, 16 rebounds, two blocks, and two steals. Anthony Carter was his usual pesky self on defense and came up with what I feel was the game-sealing rebound with the Nuggets up by six and only three minutes remaining to play, and Linas Kleiza added 15 points and also finished a perfect 8-8 from the free-throw line to round out the Nuggets offensive effort.
Did I mention that the Nuggets were outstanding from the free-throw line? Denver finished tonight’s game 33-37 and can thank the Warriors for playing such half-assed defense. Even with Golden State making a season-high 14 threes their lack of defensive urgency was their fatal flaw. They just kept fouling and putting Denver on the line where the Nuggets politely drove the final nails into Golden State's coffin.
Do I feel sorry for Golden State? Not even for a second! Now they can see if their hysterical offensive strategy and crappy defense can have any better luck in Denver where I can guarantee the Mile High maniacs will be in full force on Sunday night.
Go Nuggets!
Posted by Nugg Doctor at 11:12 PM

Great Game!!
Playoff atmosphere at the Roaracle. Second most exciting warrior game this year.
A.I. and Melo were outstanding. Props!!!
See ya on Sunday.
Go Dubs!!!!!!!!!!!!