An Open Letter to the Answer 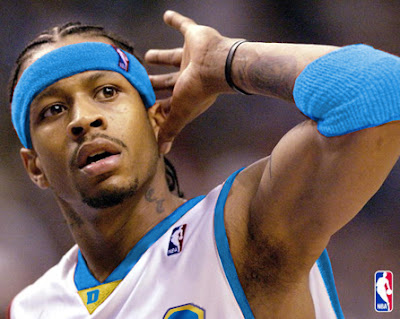 (Boulder-CO) Sean Watts of Passion and Pride has written an open letter to Allen Iverson on the anniversary of his departure from Philly. Absolutely fabulous stuff, Mr. Watts, but here's to hoping that there is a happier ending to this story in Denver than the one you had to endure in Philadelphia.
Posted by Nugg Doctor at 7:01 PM

I'm not so sure about that letter, although I did appreciate all the YouTube links. I spent a good portion of the day reflecting on the events of a year ago, lots of videos and tributes. His article came off showing slight jealousy, missing the star that got them to the finals on his own. He had plenty of compliments, but you could bet a 'but' was forthcoming. I don't take anything written about AI from a Philly guy too seriously. Now let's beat these damn Rockets tomorrow. They lost a close one tonight and should be prime for the picking. That being said lol...

Hey man, thanks for the shoutout. I really enjoy your work. Hope you have a happy holiday and your time with AI ends better than ours.

No, thank you! That was a great piece, and I'm sure it is going to please many a Nuggets fan.