Hooray, I was Wrong! 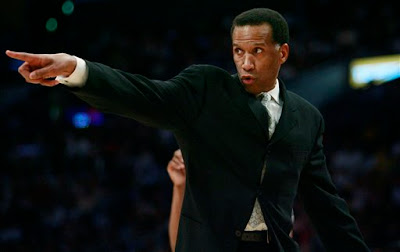 (AP Photo/Matt Sayles)
(Boulder-CO) There must have been at least five or six points in tonight’s game where I thought for sure that the Nuggets were going to falter, but they found a way to win over the Lakers, 111-105, and thankfully make me look like a dummy. J.R. Smith hit some big threes, Marcus Camby was a monster, and Carmelo Anthony paced the Nuggets offensively from start to finish in a confidence building affair that landed Nuggets’ Assistant Coach Adrian Dantley his first win in his head coaching debut.
The Denver Nuggets are now 9-1 when Allen Iverson records a double-double and that is exactly what he did tonight with a quiet 20 points and ten assists while in the Nuggets’ driver seat. AI also grabbed four rebounds, but most of those were hogged by Marcus Camby. The Captain was nothing short of spectacular, and I quote Altitude Sports and Entertainment’s Chris Marlowe as saying, “The Nuggets are downright unbeatable when Marcus plays like he did”. What did he do you may ask? Oh, I don’t know, he just scored 21 points and grabbed 20 rebounds in addition to swatting six shots, dishing two dimes, and being guilty of one steal! It was an absolutely huge performance from Marcus Camby and he was the difference in the game for the Nuggets.
Carmelo Anthony also had a rock-solid game in his own right. Matched-up with the league’s leading scorer (and supposedly best friend forever) in Kobe Bryant, the two did not disappoint. Kobe would score more points (39), but Carmelo’s team would leave with the W on the back of his team-high 31 points to go along nicely with his five rebounds and four assists. Lamar Odom added a silent triple-double of 17 points, 14 rebounds, and twelve assists, but in the end the Nuggets had more soul from the role-players that it is.
I thought for sure the Nuggets were going to slip behind the eight ball down, 100-98, with just over six minutes remaining, but that was when J.R. Smith hit the biggest three of the game and put the Nuggets up by one and for good. He would hit another knock-out bomb two minutes later, but his cool shooting hand on the first tri-fecta was the Laker backbreaker. J.R. also had two steals in the game to go along with his ten points and four rebounds.
Right back at it tomorrow night against the Nor-Cal Kings in a game that the Nuggets should win, but hey, what the hello kitty do I know?
Gutsy win fellas, Go Nuggets!
Posted by Nugg Doctor at 10:39 PM

Great win for Denver. Finally the real Marcus Camby is back! I was beginning to think it might be time to trade the Camby man, as his play of late has been uninspired and sloppy. Though he still has a tendency to be a point guard (not a good idea), if he plays like this, it will be hard for Denver to lose.

And I was so happy Dantley was coaching. Did you notice that JR Smith played the fourth quarter and crunch time and came up HUGE!!! If Karl had been coaching, you know Blake would have been in there and who knows how this game would have turned out. All I know is that JR did an excellent job defensively against Kobe, even drawing a charge and did his thing by hitting two very cluth three pointers. This is the exact reason why I think Karl is a fool for not starting JR instead of Blake. It gives us a more traditional back court and a much more electric player who can flat out it get it done.

AD playing JR was the highlight of my night. Dude's my favorite player on the squad and it kills me to see Blake taking (and missing) jumpers when JR could be catching one-handed alley-oops and making athletic steals. His defense on Kobe was some of the best I've seen all season from anyone on the Nuggets (Yak stifling Arenas in the game before AI was another good one).

And why the hell do they keep putting Steve Blake on guys that can absolutely murder him by either shooting over him or running right past him? He's a good defender for a PG, but he's clearly not able to hang with a guy like Kobe.

I like Blake for pacing's sake (mostly when we're struggling and need to run some half-court sets), but we really need to play our best lineup, especially against offensive teams like Phoenix. If we hang on the the 7th seed and end up against PHX with a lineup of AI, JR, Melo, Nene, and Camby, that series will be absolutely insane.

Someone get me a towel...

good win last night.the sharing of the ball esp.in the last few minutes of the game was exceptional.

I think I like Adrian Dantley used the rotation much more than Karl.