What a Bench Clearer! 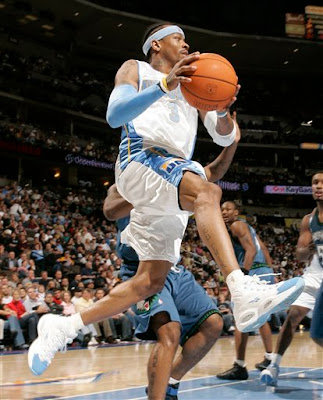 (AP Photo/Jack Dempsey)
(Boulder-CO) The Denver Nuggets started their usual five with the exception of Marcus Camby and would end up playing twelve deep in tonight’s, 122-107, thumping of the Timberwolves. Minnesota had no Kevin Garnett, and quite frankly, no chance against the Nuggets and played as if they have already mailed in the rest of the season. There were good things in tonight’s win, but for the most part this game was rubbish.
Quick highlights include Linas Kleiza’s 23 points and ten boards, Carmelo’s 21 points and five rebounds, Allen Iverson’s 25 points and three assists, Steve Blake’s ten assists to just two turnovers, and Nene’s 18 points and ten rebounds on 6-9 from the field. Yawn.
Despite Kevin Garnett not playing tonight, the only thing on my mind was the Big Ticket. Since the game was such a bore after the Nuggets twisted off a 32-point quarter while holding the Timberwolves to just 18 in the third. I had a lot of time to contemplate the situation concerning McHale, KG, and the Timberwolves franchise and came to a pretty profound conclusion.
The Minnesota Timberwolves owe it to Kevin Garnett to trade him! Obviously, there was little-to-no-reason for tonight’s game to be played, but the Timberwolves are seriously in shambles. They have nothing but shoot-first guards, nine players born either in 1978 or later, a shaky at best coaching situation, and injuries galore. Furthermore, it is just a testament to how great a player Garnett truly is that this team even won 32 games this year!
And to think that I used to enjoy watching the Timberwolves. Now all I see is a graveyard for Kevin Garnett.
Now the Nuggets have an even more pointless game with the Spurs on Wednesday night before San Antonio and Denver clash in the first round of the playoffs. Expect a whole lot of nobody to play for either team. The foresight to see this victory coming from a mile away brings my final ten-game prediction record to a decent 5-4 with a predicted loss at San Antonio pending. Somebody wake me when the playoffs start!
Go Nuggets!
Posted by Nugg Doctor at 9:22 PM