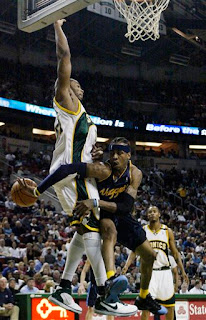 (AP Photo/Jim Bryant)
(Boulder-CO) The Nuggets put together a nice team effort that I feel is best broken down individually to illustrate how each one of your Denver Nuggets collectively did their, “thang.” They also pulled back to .500 with the, 114-103, victory over the Sonics and in doing so fend off the L.A. Clippers from taking over the seventh playoff spot. I hope you washed your hands because it’s now time to operate!

Right off the bat, Carmelo Anthony’s box score is fantastic. ‘Melo finished with a game-high 32 points and grabbed nine rebounds. In doing so he moved into seventh place all-time in Nuggets scoring history passing Mahmoud Abdul-Rauf with 7,031 points thus far in his young career. Anthony was 11-20 from the field and an efficient 10-11 from the free-throw line. He set the pace offensively for the Nuggets and was the pied piper for the rest of the Nuggets to follow.

And follow they did.
The next topic of discussion is Allen Iverson. I’ll be the first to say that I’ve been measuring this season by last season’s standard and maybe I’m giving AI a bum deal. This season has been one circus after another between the season-ending injury to Kenyon Martin, the grapple-in-the-apple, his trade, the departure of Earl Boykins, and little things here and there. It is surely going to take at least a fresh season to really see how this whole thing pans out, so you have heard the last of the comparisons to last season out of me. Gotta move on, know what I mean? The future is what matters.
All things aside, AI had a great game tonight. He finishes with 26 points, seven assists, four rebounds, and three steals. He’s still struggling from the free-throw line as evident from his 8-15 showing tonight, but I think some of that is due to the bursar sack that burst in his elbow about a week ago. A lot of guys around this league would sit and enjoy the game in street clothes, but with AI you don’t have to think twice about a thing like that. Guy’s a warrior, nuff said.
Marcus Camby’s double-double was also a big help. The Captain nabbed twelve rebounds (eleven defensive) and tossed in 3-5 from the field and 5-6 from the free-throw line on his way to eleven points.
Off the bench the Nuggets got their biggest lift out of Linas Kleiza. LK was a one man highlight reel tonight on the way to scoring 16 points, snaring three rebounds, absolutely rejecting two shots, and sliding an assist. Two of Kleiza’s points will be immortalized on adolescent male bedroom walls at the embarrassment of former Nugget Earl Watson (who had a career-high 28 points respectively). Linas flat-out scolded Watson with two-hands out on the break in the first half. The whole way back Linas just stared down Watson as if he had tried to steal something after giving Watson a little face time. The next Linas highlight came on the defensive end when Luke Ridnour let fly a 17-foot jumper and Linas swatted it into about the 19th row!!!
As a team the Nuggets shot a much needed 55% from the field and hit 35% of their long range bombs. They grossly out-rebounded the Sonics, 41-26, and bounced back after their stingy twelve assist showing with 23 assists against Seattle.
Tuesday night’s game will have a little bit of a different feel because George Karl will be in Boise with his son Coby for medical reasons. Assistant Coach Adrian Dantley will assume the head position in Karl’s absence as the Nuggets take on the Lakers in a pivotal game in the Western Conference playoff picture. I never thought I would say this, but .500 doesn’t feel that bad right now.
Go Nuggets!
Posted by Nugg Doctor at 9:21 PM