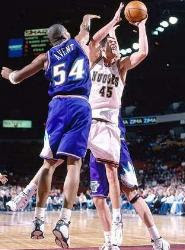 (Boulder-CO) Many of you have heard me gripe about how terrible the Nuggets’ decisions on draft day have panned out for the franchise. So in the spirit of the draft later this week I felt that we could all take a quick stroll down memory lane while taking a look at the top five worst mistakes the Denver Nuggets have made when trying to improve on the most important day between the Finals champion being crowned and opening night.
And with no further delay…
The 5th worst move the Nuggets have pulled on draft day was picking Raef LaFrentz with the third overall selection in the 1998 draft. You could argue that while Raef was in Denver he wasn’t exactly a bust due to averaging 13.8 points and 7.6 rebounds, but when you consider the Nuggets could have landed Antawn Jamison, Vince Carter, Dirk Nowitzki, or Paul Pierce the hindsight is what makes this one come in at the five spot.
And to add insult to injury, the Nuggets were just coming off a 11-71 season in 1997-98, (worst in the league), and only managed to improve their record in the 1998-99 season to 14-36 in the shortened lock-out season. Needless to say these were very dark times for Nuggets fans.