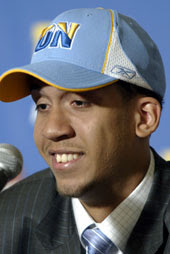 (Boulder-CO) The fourth worst decision that the Nuggets have ever made on draft day is actually a combination of moves that ended up being so bad that it made Winning the Turnover Battle’s Top Ten High School to NBA Busts. It all started in the 2005 NBA Draft when the Nuggets selected Julius Hodge and Jarrett Jack with the 20th and 22nd overall picks.
What makes these two selections so bad is due to more than what first meets the eye. Obviously, Julius Hodge wound up getting shot outside a Denver nightclub and was never able to come back and contribute for the Nuggets after really not being able to contribute in the first place. I guess we can all chalk Hodge up as just being another 20th overall pick who just couldn’t hack it in the NBA, but what makes this day in Nuggets' history even worse is how we traded the rights to Jarrett Jack to the Portland Trailblazers in return for Ricky Sanchez and Linas Kleiza.
LK might end up being the silver lining in all of this mess, but Sanchez can be summed up best by the guys over at www.winningtheturnoverbattle.blogspot.com who write, “Ricky who? Drafted the pick after Miles in the 2005 draft, Sanchez was traded on draft day to the Nuggets for Jarrett Jack, (Bet the Nuggets would take that one back if they could). The biggest distinction Sanchez has had in his career may well be that at the time he was only the fourth Puerto Rican player to be taken in the NBA draft. Since the draft the closest Sanchez has come to the NBA was a mediocre stint in the NBDL and has actually spent a nearly equal amount of time in the CBA. Ouch.”
Yea, “Ouch”, right about sums it up, fellas!
The Nuggets are in dire need of a starting point guard right now and Jack is materializing into one of the better young point guards in the league today. Do I dare add "Whoops" to that "Ouch".
Posted by Nugg Doctor at 8:07 AM

Nugg Doctor, I agree. At the time, I really didn't mind the actual trade of Jarrett Jack for Linas Kleiza and Ricky Sanchez, as this was a two for one type of move, and that at least one of the two would pan out. So far, Kleiza appears to be working out.

However, where management messed up with with the drafting of Jarrett Jack, they would have been better off just drafting Jack and Kleiza if that is what they wanted to do. Instead, they draft a guy in Hodge that really wasn't NBA ready, when at the time they could have used a point guard like Jack to groom behind Miller and Boykins.

But your right, a bad move...like so many others!