Stay Off the Pipe Shawn, The NBA Will Miss You 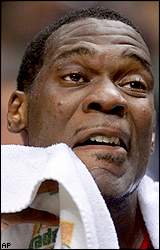 (FortCollins-CO) The NBA has probably seen the last of the Reign Man. Shawn Kemp had been working out for the Nuggets this summer in hopes of returning to the NBA and resurrecting his tarnished career.

The former All-Star hasn't played in three years and during that time has been fighting addictions to alcohol, cocaine, and marijuana. The New York Post reported that while playing for the Supersonics that Kemp had an alcohol problem. Shortly after those reports, Kemp checked himself into a rehabilitation clinic for cocaine related problems in 2001. Since then he has been arrested in the Seattle area in 2005 with small amounts of cocaine and marijuana in his car. By the way, this is all while ballooning up to almost 340 pounds.

Since those dark times in Kemp’s life, he had been trying to fly right and make a return to the NBA. He had reportedly lost almost 70 pounds and was steering clear of the bottle. The only problem is that Kemp couldn’t shake puffing a little cheeba. On July 21st, 2006, Shawn Kemp was once again found with misdemeanor amounts of Marijuana and since that incident the Nuggets have ceased all contact with Kemp.

Not that I expected Kemp to make the Nuggets roster or be a contributor, but this is probably the last time we will hear anything from Shawn Kemp in regards to basketball. A shame too, Kemp was one of the most spectacular athletes the NBA has seen in the last couple decades. I am sure to get around to writing the “Historical Glimpses” soon, but don’t hold your breath.
Posted by Nugg Doctor at 2:27 PM