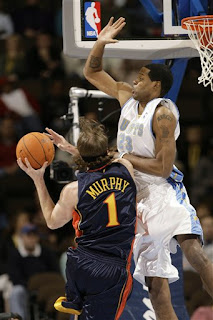 (Boulder-CO) ESPN2 and NBATV are reporting on their screen tickers that Allen Iverson will miss the All-Star Game this weekend due to his sprained ankle. He has been quoted saying in regards to the All-Star Game that he has, “Been there, done that”, already in his career and that the situation in Denver is more important to him than participating in the midseason classic. This is big news because Steve Nash, who injured his shoulder against the Nuggets on February 5th, will also not participate.
All of this could be good news for the Denver Nuggets’ big man Marcus Camby because he is leading the NBA in blocked shots and is also second in the league in rebounding behind Kevin Garnett (12.5) with an average of 12.1 boards a night. He has led in both categories on and off all season long with the rebounding edge going to KG just recently since Camby missed time due to a pulled groin and the flu.
Marcus will be up against some stiff competition for the final two, and suddenly vacant, All-Star roster slots with Ray Allen, Zach Randolph, Mehmet Okur, and Deron Williams all playing rock-solid basketball right now. With that being said, it should also be taken into account that since the Utah Jazz are now not being represented, since Carlos Boozer is a scratch due to injury, that one of his Jazz teammates is all but a lock to represent that franchise in one of those two vacant spots. Thus, leaving a good chance for Camby to get the late nod for his first NBA All-Star selection.
I like Marcus’s chances of being named a “consolation” All-Star because he has been posting career numbers in rebounds and is also having his best season passing the ball (3.2 assists per game). Currently he is averaging a double-dozen of 12 points, 12.1 rebounds, the aforementioned assists, 3.1 blocks, and a steal.
Here’s to Marcus Camby meeting up with Carmelo Antohny in Las Vegas for the 2007 NBA All-Star Game!
Posted by Nugg Doctor at 10:46 AM

Well that sucks -- Okur and Ray Allen. I mean yeah, both deserve it, but I really would've loved to see Marcus out there. I think it should've been Deron Williams (to cover the Jazz and give another PG) and Marcus... Oh well, maybe somebody else will bow out and open the door up again. Kidd is out in the East also.