The Doctor is Embarrassed 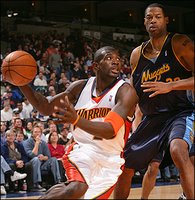 (FortCollins-CO) I am totally exhausted by watching the Denver Nuggets lose to the Golden State Warriors. There was no team concept in tonight’s performance. The Denver Nuggets played selfishly on both ends of the court and were collectively outplayed by the Warriors.

On defense, the Nuggets allowed offensive rebounds to be cleared because of no fundamental defensive principles. As a group, they pitifully defended the three-point line. They pouted all night because of the refs and constantly felt bad about themselves instead of pulling themselves up by their bootstraps and playing basketball. Quite simply, the Nuggets played as if they were standing in the unemployment line waiting for a handout. In this league, it just doesn’t work that way. You have to earn a victory.

Offensively, the Nuggets were effortless until two minutes left in the fourth quarter when a sudden sense of urgency seemed to bring them back to life. Practically coming back from twenty down, the Nuggets got it as close as five with a three pointer and sneaky steal by Carmelo Anthony. Linas Kleiza provided a late surge, but it was too little too late. Even a 41 point fourth quarter couldn’t bring the Nuggets back after a third quarter collapse when they were outscored 35 to 15.
If there was a bright spot in this horrendous showing it was Carmelo Anthony. The Nuggets young superstar finished with 34 points, six rebounds, and two assists. If the rest of the Denver Nuggets could play with half the energy that ‘Melo comes with every game they would be better than two games above .500. For now, the Nuggs need to regroup and forget about this one. They have a big game coming up against Chicago on Wednesday. If they don’t want to be embarrassed again they had better muster up some motivation and a purpose. I wouldn’t want to be at George Karl's practice tomorrow.
Posted by Nugg Doctor at 10:14 PM

PizzaDaHutt said...
This comment has been removed by a blog administrator.
10:30 AM

So, "The Doctor is Embarrassed" after getting whooped up on in Oakland.
"In this league, it just doesn’t work that way. You have to earn a victory." Come on in this league your not suppossed to play hard unless your the home team. The 2 best teams in the league have won 18 and 19 of their away games while the Nuggs are 10-15. When the Spurs and Pistons come to town teams just shut down because they're shocked that a visiting team is playing hard.
You cant expect the Nuggs (a middle-tier team in the west) to play hard in away games when they're more focused on ordering hookers and blow to their hotel suites. As my sources have confirmed.