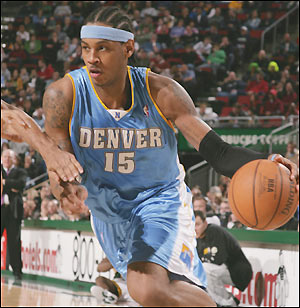 (FortCollins-CO) The good news for the Denver Nuggets is that they persevered and got the overtime win on the road in Seattle against the Supersonics 120-112. The bad news is Marcus Camby left the game in the fourth quarter with a strained neck.

Examining how the Nuggets earned this win it was apparent that when the Nuggets play as a team, they are much more effective on the offensive end. Four of five starters, excluding Greg Buckner, scored in double figures. Carmelo Anthony did exactly what I said he would do. Anthony came into the game with a chip on his shoulder, even the announcers made a comment, to show up Ray Allen on his home court. ‘Melo ended the game with 33 points and nine rebounds plus his team got the win. The beauty of that is two other Nuggets scored 20, Anthony went 9-21, and was sensational from the charity stripe only missing twice out of 17 attempts.

Andre Miller was just as critical as Carmelo. Miller has been playing great as of late. He routinely backed down Luke Ridnour and scored effectively. No more effective were his seven overtime points which were the difference down the stretch. He added nine assists and three rebounds go nicely with his 21 points. Miller is playing with a confidence that has been touch and go all year, but he is climbing to his apex at a critical time in the season. Kenyon Martin is also playing great. Martin gave 39 solid minutes and recorded a double-double of 22 points and ten boards. If he can resume this kind of play, stay healthy, and just keep his name clean of all media scandal he can be an enormous impact.

The contest was tightly battled all night long. Back and forth each team would only hold the lead momentarily until the Nuggets exploded in overtime and sealed the deal. In the end, Seattle turned the ball over 23 times and was out of gas in overtime. The Nuggets held them to just ten points in the extra period and now have won two straight.

The Nuggets square off against Steve Nash and the Phoenix suns on Wednesday night at Pepsi Center. The Suns will be looking for redemption from the overtime loss they were handed by the Nuggets earlier this year. The Nuggets will then be off for the All-Star break and it will be a much needed rest for the team, especially Marcus Camby. Hopefully the newest injury to Camby can be nursed over this time and he can come back refreshed and ready to go for the last 29 games of the year.
Posted by Nugg Doctor at 9:48 AM

Great insight on Carmelo's motives. Whether or not he thought about Ray Allen is negligable. What is important is he showed up, got the job done, and got the victory. Ray scored one more point, but got the loss. whats 33 compared to 34 anyways? thank you for not forgetting kenyon's roll either. Props are given on a need to be given bases!

Wow, My readers must be getting out of bed late today! Thats ok by the Doc. Get your rest. Keep reading, I will be doing some historical glimpses over the All-Star break that you will not want to miss. I have no ax to grind with kenyon in particular. I just believe that athletes should be examples to young people and realize that what they say and do is very influential. Your exactly right, when props are deserved, they will be given by the Doctor.

I couldnt agree more that the nuggets are far more strong on the offensive side than the defensive but thats ok because this win was an amazing one. They played hard and kept up the good work to come out and prevail in the end. I believe that as long as you dont let your ego get in the way of your "teamwork" then things will work out for everyone, which hopefuly the nuggets continue to do the rest of the year. Great post, please keep up the great info. Thanks Doc.