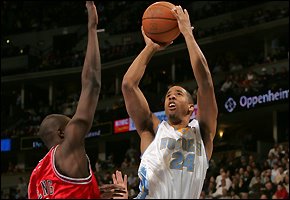 (FortCollins-CO) The Denver Nuggets are lacking of a defensive identity. Consequentially, the offense is struggling and the trade rumors are starting to circulate. All of this plus the fact of the matter is, the Nuggets have lost five of the last six games. Tonight they gave a dog of an effort against the 20-27 Chicago Bulls and got beat on their home court to the tune of 110-107.

The Nuggets once again gave up more than 30 in the first quarter. They are just not playing the game as if they are playing to win, but more like merely to compete. The defensive rotation is slow and the weak side boards are atrocious. Need hard evidence? Tyson Chandler had four offensive rebounds, six rebounds total in the first quarter alone. Not to mention numerous good looks at the cup due to Kirk Heinrich penetrating and dishing off. The Bulls also dominated the second chance points stat column 15 to 0. Taking nothing away from Chandler, but the Nuggets did have two seven footers starting this game and should have been able clear the ball.

The second quarter had little more to offer of much difference. Without defensive stops, which lead to fast break opportunities, the Nuggets get caught in a funk offensively that is hard to break out of. The Nuggets need to run. They are currently the sixth best scoring team in the league, and without fast-break scoring opportunities the team dynamic suffers.

After half, the Nuggets once again put up a lack luster effort being outscored 22 to 28 in the third quarter and down 15 going into the fourth. To their credit, the Nuggets did fight back and make it interesting down the stretch. But the problem with this trend is it is in the realm of desperation. If the Nuggets could play like they are down twenty all the time, even when they are up, they could finish teams instead of being in dogfights down to the last five possessions.
So I have two prescriptions for the Denver Nuggets and management. First, it is a crying shame if Carmelo Anthony doesn’t get the coaches’ vote to the All-Star game. He is seventh in league scoring, on a team that is leading their division, with little to no consistent help. Secondly, and more important to the overall picture, Kenyon Martin needs to packaged up in a deal with Voshon Leonard, Earl Watson, Nene, and Greg Buckner in any combination for a complimentary scorer for Anthony. Marbury would allow Miller to become a technician at point guard. Steve Francis would do the same, just wouldn’t contribute quite as well in the assist column. Something has got to change; Martin must think that being a player in the NBA is a part-time job. Your not hurt bad enough if you’re coming back every other game. You’re evidently picking your spots. Kiki, wrap up a deal and shake this team up, maybe they will realize the potential they are squandering.
Posted by Nugg Doctor at 9:41 PM

WOW!!!! The nugg doctor seems to have the right diagnosis, in regards to this seasons sub-par nuggets squad. I have been waiting the last two seasons for Kiki to make an agressive move and finaly, trade some of our more lackluster B- squad players that seem to be filling up the bench and, holding the team back from advancing anywhere past the first round of the playoffs. Marbury or Francise, would both be a much needed and wanted breath of fresh air. Please keep us readers posted on anymore trade news. Keep up the good work.
-Turk

Melo is an all-star, it would be a shame if he didnt recieve a coachs vote. I'm keeping my fingers crossed.

Damn these nuggets, I am so sick and tired of watching them get there lunch served to them for 3 quarters, then try to pull a magic trick in the last 6 minutes of the game. You are exactly right. Martin is a bum!

"The Denver Nuggets are lacking of a defensive identity." no shit shirlock tell me something i don't know. They have never been able to play defense, name one good defensive player on the team. Thats why they needed (and thats why 'smello was begging for) a Ron Artest trade. Face it the Nuggs can't play defense because they never signed anyone who could play defense. (plus they're too busy ordering hookers and blow to their hotel suites)

Dont try and come at the doctor with pseudo science, know the game, know the numbers, know when your out of your league.

blog space is looking great! Loving the gab from the readers, getting a little testy, don't mess with the doc! Nice going...now come on Denver what the fish is up??? Get in the groove and get with the wins, what is it going to take?? frustrating!

"know when your out of your league." What league do you belong to again?

"if he was healthy" thats a big if. Part of being a good defensive player is being tough. (i doubt anyone would use that term to describe camby) He has only played in 31 games this year. The only guys on the team with less games are Julius Hodge and some guy named Nene. You can't claim the guy is an intimidating presence when he's watching the game from the ice tub.

And i was really talking about a forward or guard getting a defensive presence at the three-point line like Ron (suspended for a year) Artest. If 'smello isn't willing to D it up then they need to get someone who can. How many times was jordan picked for the NBA All-Defensive team? Nine times in eleven years.

In Reply to Pizzadahutt's question:

I belong to the league of sports journalist that make arguments based on fact, not brash comments and grand illusions of players that dont play for us. Good homework on Jordan. He was also defensive player of the year too!

"league of sports journalist"
what is that like the "League of Extroardinary Gentlemen" 'cause i didn't see that movie. heard it sucked though.