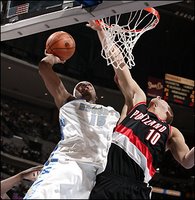 (FortCollins-CO) The Denver Nuggets entered Saturday’s game against the Portland Trailblazers on a four game losing streak. They barely escaped five. With the type of lethargic defense and high shooting percentage they were allowing it’s amazing that they found a way to emerged tonight with the victory.

From the opening tip, the Nuggets were giving up an astoundingly high field goal percentage. In the first and second quarters, the Trailblazers shot 66 and 52 percent from the field. Luckily the Nuggets were taking advantage of soft interior defense by Portland, and found themselves only down two at the half after Sebastian Telfair hit a running 35 footer at the buzzer. The Nuggets were especially fortunate at this point to be only down two. Carmelo Anthony was a mere 7-17 shooting and Camby was effectively contributing. Ending the first half with 13 points and 5 rebounds.

Then the Nuggets opened up the second half and flat lined defensively. Playing without a defensive objective, the Nuggets were backed into a foxhole when the Trailblazers shot another high percentage by exploiting a soft key area and once again posting above 50 percent from the field. 57 percent to be exact. This game was on life support. The Nuggets were twelve down, the momentum was in Portland’s favor, and the Nuggets needed resuscitation going into the fourth.

Call it divine intervention. Call it coaching. I say, call in the Nugg Doctor. The Nuggets were resuscitated by defense, as I prescribed in my last post. By only allowing the Trailblazers to score 20 in the quarter the Nuggets were tied with 1:59 to go. That’s when an errant turnover by the Blazers led to the most impressive dunk in young Carmelo’s career. It started by breaking down Rueben Patterson off the dribble and ended up with ‘Melo eye level with the rim and Theo Ratliff a couple of floors below looking out below as he was infamously slammed on. Zach Randolph provided five points approaching the final seconds before fouling out. With the shot clock overshadowed by four more seconds than on the game clock it happened... Andre miller made the defensive play of the game when he picked the opposing guard’s pocket and scored with a game synching lay up that put the Nuggets ahead by one, 105-104, and for good with four seconds left in the game.

Carmelo Anthony made a statement this game. After struggling the first half and shooting only 7-17. He came back strong and finished with 33 points, five rebounds, and eight assists. The Denver Nuggets have not had an All-Star game starter since Alex English in 1989. Averaging 25.4 points coming into this game, leading the division leaders in scoring. Why isn’t Anthony getting his much deserved respect? He is now, at least from Theo Ratliff. Whether or not he gets the coaches vote for the mid-season classic is yet to be seen.
Posted by Nugg Doctor at 9:33 PM

You are right Dr Nugg and I agree with you. Continue your great diagnosis' and hopefully George will adhere to the prescriptions setforth for the prognosis to be favorable. Hope he's reading! Nice going!

Yo keep up the good work. The nugg doctor is right on point with the diagnosis.