Get Martin Out of Here, His Antics Will Not Be Tolerated 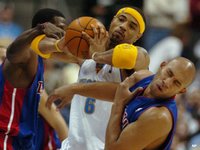 (FortCollins-CO) Kenyon Martin has taken another step away from professionalism and one step closer to goonery. Reports of allegations circulating around Kenyon Martin stem from fans that say after heckling Martin, he motioned to friends who then approached the game patrons. Furthermore, the fans say that Martin’s goons threatened them. This all while Martin enjoyed his popcorn and peanuts from the end of the bench in street clothes.

The words exchange are in the realm of this quote taken from Woody Paige on ESPN’s Around The Horn on February 10, 2006. Woody quoted the fans’ statement of saying that the alleged hit men said, “Shut your mouth or we will take you outside and beat you!” Quite the statement of class and Martin’s overall happiness in Denver, don’t you think?

Investigations have speculated that a Denver Police officer also witnessed the alleged altercation. No charges have been filed to date, but I feel that the true colors of Kenyon Martin are really showing through. He has always been a chump in a Denver Nuggets uniform. I say in a Denver uniform because I was a big fan of K-Mart at the University of Cincinnati and in his years with the New Jersey Nets. I was also very happy to see Martin in Denver originally, but he has not worked out for the Nuggets so far and certainly isn’t reflecting of the class organization, which is the Denver Nuggets.

I hate to bring up dark spots in anyone's career, but this incident reminds me of the racial slurs spewed to a fan by the great Dan Issel. And once again I believe that if truth materializes in this story that it should demand a public apology and Martin’s trade papers. If it doesn’t accomplish the latter, I hope it makes K-Mart reflect on the opportunity at hand to be a part of this organization and straightens him out for the remainder of the season.

Be a professional. That fan was letting you know that they care about the team and have loyal support for it. Ultimately they only want to see you win. Regardless of how moronic a fan’s conduct, it is up to authorized security to handle it, not your goons. If you’re being harassed tell a stadium usher or player security. Memorandum to Kenyon Martin: Act like a professional or don’t let the door hit you were the good lord split you.
Posted by Nugg Doctor at 4:24 PM

Martin's not a good mentor for the young up and coming-I say, we do not require more negative energy within our sports arena's, religious territories, political faces, homes, families, children! Martin should be banished from our televisions! Maybe that is part of the diagnosis that Denver needs to pull out of the slump-team players should be prescribed. This is not as upbeat as usual so don't let Martin pull us down, the prescription should be-MOTIVATE! Let's go Denver!

The faster we can get rid of K mart the better. He is such a baby who talks a lot of crap with nothing to back it up. I would have no trouble forgetting his less than memorable time as a nugget.