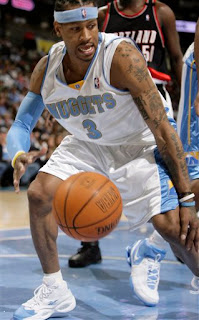 (Boulder-CO) The Denver Nuggets played their best statistical half of defense of the year and as a result built a comfortable lead by halftime and returned to .500 on the season with the, 107-99, win. I know, I know, you’re sitting there in your living room or at your office computer thinking, “The Nuggets only played a half of defense and he’s this happy?” And my retort is, “Yes,” because at this point you have to savor the small miracles when it comes to Nuggets’ defense. Plus, I can see the comic book thought bubbles over your head so don’t even try to deny it.
Allen Iverson and Carmelo Anthony combined for sixty points, but first I want to talk about the performance of Marcus Camby. The Captain was absolutely phenomenal defensively and finished with 14 points, ten rebounds, seven blocks, two assists and a steal. He was everything I thought he could be for the Nuggets against a Portland team that is currently searching for answers in the paint. Major kudos for Marcus dominating a situation that was his for the taking.
In the first quarter, the Nuggets did something that I’m unofficially calling a first on the season. Denver managed to play the entire first twelve minutes without turning the ball over one single time! Although they would make up for it in the second quarter with seven screw-ups, the first half’s defensive effort and fast break emphasis resulted in the Nuggets enjoying a 37-55 advantage.
In the third, the Nuggets came out lethargic and sloppy allowing the Trailblazers to score 34 points and close the gap to seven with the score, 78-71, entering the money quarter. A combination of the Nuggets falling asleep on D and the Blazers warming up from the field went hand in hand in making this one closer than it needed to be. Tonight it didn’t burn them, but against a stronger offensive ball club these types of sputtering breakdowns raise a big red flag for me. Come playoff time the Nuggets are going to really pay the price for like stretches of uninspired basketball , thus making this numero uno on my, “Things to work on”, list for the Nuggets.
But for tonight I am going to stay positive and rest my case.
The fourth quarter was time for the Nuggets to enforce their will upon the Blazers. Allen Iverson scored 14 of his game-high 31 points in the final twelve minutes and finished with ten assists, five steals, six rebounds, and a block to boot! He was assertive when the Nuggets needed him most and led this team in crunch time. His partner in crime in the fourth was Carmelo Anthony. ‘Melo added seven of his 29 points in the final twelve and kicked in eight rebounds, three assists, and a steal for a workman like stat line. I felt that Carmelo was shortchanged by the refs on a couple of occasions that usually end with ‘Melo cashing in from the free-throw line. So much so that Anthony got hit with the Nuggets’ only T of the game after he was spun around on the baseline with no call for the and-one. Not that I endorse such belly aching, but hey, I’m just sayin…
Now on the horizon for the Nuggets are the Lakers Thursday night. I will be at Pepsi Center for the match-up with La La land in a pivotal game with only one game separating the two teams for the sixth playoff spot in the west. The Nuggets now also have an identical amount of losses as the Lakers, so a win on Thursday would tie the Nuggets for said playoff position. Thursday night is the first of three remaining meetings between Denver and LA so expect a playoff-type atmosphere when the leather gets put in play.
Nice win against the Blazers, Denver. Go Nuggets!
Posted by Nugg Doctor at 9:07 PM

Nice game summary. I was at the game and left still not knowing if the glass was half full, or half empty...I watched Doug Moe for a time, he looks like a guy who is getting paid but whose ideas are either not taken seriously or who has absolutely no influence on the offense. Too bad, but he certainly is very frustrated.