Parrot Fish, I Told You So, and the Nuggets Lose

(Boulder-CO) It always seems to happen. More often times than not it seems to happen in the third quarter. Any guesses as to what the Nuggets did tonight that sealed their certain doom? C’mon, take a wild stab at it. Think you have a good answer? Well, if you’ve guessed, “collapse offensively” you’re a winner! Tonight the Nuggets take the L from the Detroit Pistons, 95-82, and fall to 29-31 on the year. They also lose once again when not able to score a hundred points; bringing their record when such occurs to an absolutely embarrassing O’fer 21.
Denver’s box score is just horrendous. Carmelo Anthony scored 17 points while grabbing seven rebounds and turning the ball over just as many times. The Answer finished with 19 points and four assists, and the only other Nuggets who hit double figures in scoring were Eduardo Najera and Linas Kleiza with eleven and fourteen respectively. As a team the Nuggets were an awful 29-77 from the field and only assisted each other 18 times on the night. And their biggest offensive collapse (15 points in a quarter of NBA basketball) once again happened in the third and lingered all throughout the second half. In the final 24 minutes the Denver Nuggets only scored a total of 35 points and were outscored by Detroit by 13. The exact same margin they ended up losing by.
I told you the Nuggets would lose this game if they didn’t get to a hundred points, and it now seems like the solidarity of the Denver offense is fading fast. Give credit to the Detroit Pistons, they played their asses off on defense, but when a team can’t throw it in the ocean, (not to mention the shot selection on a couple of occasions), it sure does seem that much more futile in the end. And without the ability to score points in flashes the Nuggets are merely a mediocre at best team. They don’t share the ball with any consistency, have no consistent threat from downtown without J.R. Smith, and lack the emergence of a coagulating leader.
As you can tell I am not very happy right now because I can almost predict the way this season is going to end. I’ll spare you for now, so I’m going to leave you with a very funny player/animal look-a-like that was called by my friend George. In the fourth quarter, George says, “Look at Chauncey running the point and looking like a damn parrot fish.” And upon second glance, I think he nailed it! Sorry, Chauncey, but when it comes to player look-a-likes the rules clearly state, “No blood - No foul”. 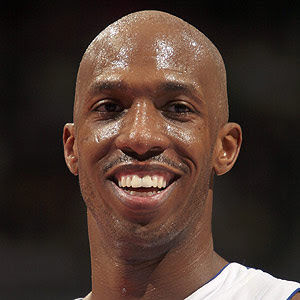 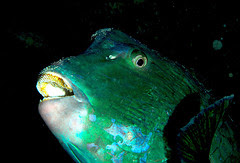 Up next is a Sunday afternoon match-up with the Sacramento Kings. I’m going to be keeping an eye on the playoff race over the weekend and working on surprise for you. Check back over the weekend if you still bleed blue and gold.
Posted by Nugg Doctor at 9:12 PM

I don't like to be pessimistic, not at all... but I think the season is pretty much over now.

Time for the Nuggs to regroup and get ready for the new season. The group will probably stay the same, since our LOTTERY PICK (Durant, Oden) will head to Philly... Never expected the Iverson-deal to unfold this way...

nice write up even though the outcome was a bust! Whew, what can a person say? Love the comparison with Chaunc~ strangley, there is a likeness. Look forward to the surpise, hmmm, a win perhaphs, awh, one can only hope.