(Boulder-CO) If the Nuggets can’t feel the hot and stinky breath of the Sacramento Kings on the back of their necks then this team is more out of it than I thought. Currently the Nuggets are some how holding on to the seventh spot in the left coast playoff picture with an overall record of 29-31, but the Kings are right on their tail at 28-33. Sacramento is just a game behind the Clippers for the eighth seed and a game and a half behind the Nuggets. So, expect nothing short of a playoff type atmosphere when these two meet up at Arco in a few hours.
And guess who is returning to the Kings and bringing more off the court bologna than an Oscar Mayer factory? Ron Artest! Allow me to go on a rant here for a second… If the NBA wants to shape up its image they should give Ron-Ron the boot indefinitely. The guy talks more garbage than Oscar the Grouch, is a shitty rapper, a terrible animal owner, a complete distraction for his team, and allegedly can’t keep his hands to himself with women, fans, or god knows who else that we don’t know about. To put it short and sweet-this guy is an idiot. A good defender on the court, but if the NBA is all about cleaning up their image, well then, they aught to start by putting Artest on unemployment.
Ok, I feel a lot of better so let’s get back to basketball.
Denver's road losing streak to Sacramento, which dates back to Jan. 7, 1997, is currently the league's longest by one team against any opponent. The Nuggets have lost 20 straight on the road to the Kings, including a 94-87 defeat on Feb. 3. The Nuggets have also lost their last two games making another three game slide almost, but not definitely, a reality. It would be nice if the Nuggets could break their streak of futility in Sacramento, but don’t bet on it. The Kings are a respectable 18-13 in the noisy Arco Arena and have been winners of six of their last ten games. The Nuggets on the other hand are 3-7 in their last ten game stretch.
And there you have it, Nuggets Nation. Not a whole lot of analysis, but at this point what is there to say? Denver has inconsistencies abundant right now and you just never know what kind of Nuggets team is going to show. With J.R. Smith still not ready for a ton of action does anybody know who is going to start in the backcourt with AI? DerMarr started against the Pistons and Yak started the game before against the Warriors. Steve Blake works on paper, but embodies the Webster’s definition of “inconsistency”. Ah hell, just throw the tip already…
Go Nuggets, overthrow the Kings!
Oh wait, I almost forgot this player look-a-like. Corliss Wiliamson looks just like the genie from Disney’s Aladdin. Your thoughts in the comments section. 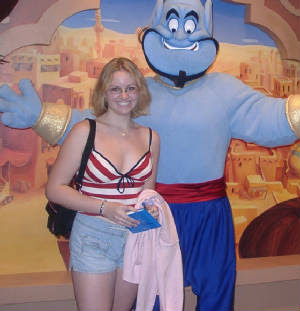 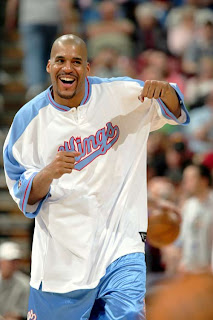 1. What did you think about the Iverson technical? Seemed undeserved.

2. Who the hell is Linas Kleiza?

3. Did you think that Ron Artest's indefinite separation from the team would last a little longer than 2 games?

Thanks and keep up the good work.

The Allen Iverson tech was terrible. The call should of been on Kevin Martin for the trip and he was only running over to the bench to have a seat with his third foul. It did't need to be called.

Linas Kleiza is a product of University of Missouri and originally from Lithuania. He is a pretty good player, I like him, but he hasn't exactly found a role yet.

And I think that Ron Artest needs a hug! The guy is just a ticking time bomb and you never know just what he is capable of. And yes, I do think he needs to be away from basketball for awhile to really work through some of the things in his personal life, but... Domestic violence is serious thing, and unfortunately people still go to work the next day.

LOL
"And I think that Ron Artest needs a hug! The guy is just a ticking time bomb and you never know just what he is capable of"

That Kobe guy needs a hug, too.