What the Hell was That? 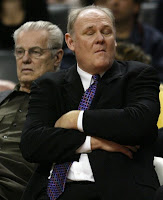 (Boulder-CO) The Denver Nuggets started this game 0-15 from the field and fell behind 0-12 to the Raptors who proceeded to beat the pants off the Nuggets, 121-94. To have to endure a devastating loss like the one just taken at the hands of the Bulls and then to put out a showing like tonight’s has to be tough for any basketball team to go through. The Nuggets shot a freezing 37% from the field, didn’t block a shot, were grossly dominated in assists 31-18, and generally looked confused from opening tap to closing buzzer.
The Raptors on the other hand were ready to take care of business early and didn’t break for lunch. Toronto opened the first quarter with 36 points worth of whoop-ass while the Nuggets barley managed 15, and then the Raptors doubled their output before halftime putting them in the lead, 72-43. Their biggest lead of the night would be 38 when the Nuggets were officially pronounced dead, 83-45, with eight minutes and change still remaining in the third quarter.
The Nuggets’ side of the box score is absolutely baffling. Reggie Evans was the game’s high rebounder with 15, J.R. Smith played well finishing with 20 points and six assists, and Linas Kleiza had 20 and seven, but the Nuggets looked completely lost on offense. The staple that the Nuggets have lived off of just wasn’t there. Allen Iverson eeked out 14 points with three assists and just as many turnovers. Carmelo Anthony had a hard time throwing pebbles in the ocean finishing 3-15 from the field for season-low ten points, two rebounds, two assists, two steals, and four turnovers. And without the usual 57.6 points these two average, the Nuggets were just plain out of it.
I guess the bright side of all this was DerMarr Johnson and Jamal Sampson each had a deuce. I’m happy for them, seriously.
Go Nuggets! (condescendingly)
Posted by Nugg Doctor at 7:08 PM

Well I DVR'd this game and accidentally saw the score before I could watch it. Thank goodness. I won't subject myself to 2 1/2 hours of frustration. The Raptors? Oh Lord...

I feel your pain answer, but in defense of the Raptors I think it must be said that they are in fact a much improved team overall.

It was a dissapointing performance by the Nuggets but I hope they bounced back today when they battle the Cav on nationally televised game.

*can i link u in my blog.thanks.