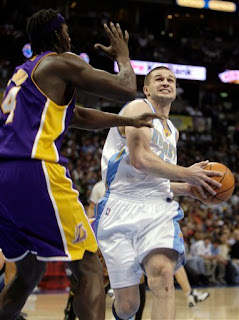 (Boulder-CO) This, 113-86, win against the Lakers was nothing short of spectacular and it couldn’t have come at a better time for the Denver Nuggets. There is still a ton of hoop to be played, and a lot of storylines yet to still unfold, but I really like what I have been seeing out of the Nuggets in their last three games. I was hoping for around 36 minutes of great defensive effort against the Lakers and the Nuggets treated the home crowd to that and then some! Now the fruits of their labors have the Nuggets in the sixth seed in the Western Conference playoff picture and just as, if not more, importantly this team is really coming together.
The game recap has to be started off with a summary of Linas “Amaze Ya” Kleiza. The young Lithuanian, who was just coming off a career-high 24 points against the Kings, out did himself again against the Lakers by filling up the scoring column for a new NBA best 29 points and six rebounds. Confidence is making all the difference in the world right now for Kleiza’s shot as he did most of his damage from the three point line. He was a cool 5-6 from downtown and was 4-5 from the free-throw line. His game was simply fantastic and I hope that he can keep up similar play from here on out.
The first half was push and pull with the lead changing hands a couple of times in the second quarter before standing tied at the half. Both teams were getting after it, Kobe Bryant was hitting jump shots over good defense, and the Nuggets were running but it was not enough for my liking. The good defensive intentions were there for the Nuggets, but they were just missing that bounce that makes the difference when rotating over and getting a stop rather than picking the ball out of the net. However, with the game tied, I was pretty sure that the second half was going to be dog fight to the finish.
And boy was I ever wrong…
The Nuggets came out for the start of the third quarter and had their defensive fire roaring as if someone had thrown kerosene on the blaze! Denver held the Lakers to just 21 points in the quarter while all the work on the defensive end translated into fast break opportunities galore. Running, gunning, slashing, and passing were the Nuggets on their way to a 36-point quarter without knowing with that effort alone they had sealed victory with still twelve minutes of basketball yet to play.
And their defensive intentions were not ready to waiver either…
The Nuggets gave L.A. a double-dose of vitamin D in the final quarter only allowing them to score fourteen measly points on their way to the blow-out. They added their own 26 to serve as the nail in the coffin and the Pepsi Center loved it. Despite having a ton of Laker supporters on hand, everyone in yellow and purple was dead silent as the Mile High Faithful were exchanging high-fives in the aisles and loving every minute of it! This was the Denver Nuggets we all envisioned when this season started. We just didn’t expect to have to wait this long for ‘em to show.
Notable Nuggets are plentiful. To go along with “Amaze Ya” Kleiza; Carmelo Anthony scored 26 points while clearing eight rebounds and dishing five dimes, Allen Iverson double-doubled by scoring 14 points and giving 13 assists, Marcus Camby deuce-deuced for eleven points and fourteen rebounds, and Steve Blake was economical with 15 points off 3-4 from downtown.
Eduardo Najera also played solid basketball, but did so in a manner that doesn’t show up in the box score. Eddie was his typical scrappy, annoying self on defense and caused problems for L.A. with his swarming style regardless of who he was matched up with.
On a Laker related side note, this is the first time in Phil Jackson’s coaching career that he has ever lost seven straight games. If I may paraphrase Jackson for a second, he may have been right when he said he didn’t know if Jesus himself could right the ship for the Lakers right now. Strangely enough… I am enjoying every minute of their collapse! Nuggets in the sixth seed baby, and I may be coming down with a case of Nuggets-istis!
Mark your calendar for Saturday when the Nuggets conclude this home stand by hosting the Phoenix Suns. Should be barn burner. Go Nuggets!

I was at the game, I can't believe how many Laker fans are here in Colorado, This was the best team win this season.

I was there too, tymes, and I definately agree with you!