Just Barely Better than the Worst 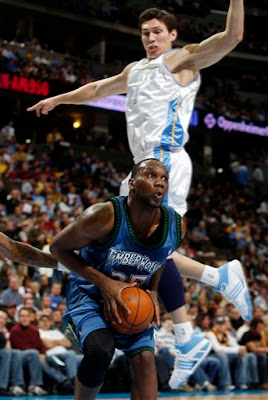 (AP Photo/David Zalubowski)
(Boulder-CO) The Nuggets should be very thankful for this win. They didn’t play with very much heart, were out dueled in most of the cumulative box score, and if it weren’t for the game being against the struggling Timberwolves, (no offense to anyone personally), I don’t even think they would have ever been in a position to steal this win. However, despite playing a terrible game and losing the stats battle, the Nuggets were playing the Timberwolves and more importantly did win, 99-93. Which, ehh hmm, is exactly what I told you they would win by! Thank you, thank you no applause needed.
To say that the first half was miserable would be an understatement. The Nuggets once again came out lethargic on defense and were allowing a smorgasbord of lay-ups and wide-open shots. Over and over again I found myself asking why do they come out in these funks where nobody seems to be playing very hard. There were guys lollygag around the perimeter, getting beat to loose balls, they didn’t collapse on penetration to the rim a few times, and the overall effort just stunk. And because of the uninspired half, the Nuggets went into the break down by five.
Something had to give. Someone needed to say something. Somewhere there needed to be a spark.
Thankfully, the Nuggets did come out with a different attitude in the second half and their changes were most notable on the defensive end. After surrendering, (and I use that word is truest definition), 56 points in the first half, the Nuggets clamped down on the Timberwolves in the second and only allowed 37 Minnesota points to be scored. And although both teams shot below 40% from the field in this game’s ugly conclusion, it was the Nuggets 87.8% from the free-throw line that saved them. Led by Carmelo’s perfect 11-11 from the stripe, only Allen Iverson (9-11) and Kenyon Martin (8-10) missed more than one free-throw a piece. Otherwise, the Nuggets were out-rebounded badly on the offensive glass 13-6, out passed 25-21, out robbed 10-8, and out shot from the three-point arch 10-24 to 3-14.
Offensively, there wasn’t a whole lot to be proud of, but since this was a Nuggets win I’ll mention Carmelo’s 31 points and seven rebounds, Marcus Camby’s ten points and 18 boards, and Kenyon Martin’s 18 points and six boards. I’ll also mention that no rebound was more important than the offensive board Marcus pulled with 47 seconds left in the game which was promptly thrown right back into the goal without him even touching the ground. It was the defining moment of the game and capped off an otherwise lack luster performance.
My last Nugget of note is Anthony Carter made his return from a broken hand suffered during training camp with nine points, three assists, two rebounds, two steals, and a block in 22 minutes of action.
Go Nuggets!
Posted by Nugg Doctor at 9:29 PM

I was at the game and let me tell you doc, the Pepsi Center was absolutely pathetic. I didn't think it was possible for 17,000 people to be so quiet. Maybe it was just a giant turkey hangover, but if this becomes a normal home crowd, there is no way we can expect to have any home-court advantage. STEP IT UP NUGGS NATION!!!!!!!