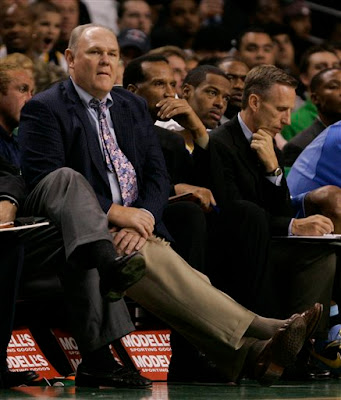 (AP Photo/Charles Krupa)
(Boulder-CO) I would not want to be at Coach George Karl's practice tomorrow.
Denver got its first test against an elite foe tonight and failed miserably, 119-93, against the Celtics. Just how bad was it? How’s this for a lowlight reel of the first half? For starters, the Nuggets only shot 38% from the field while allowing the Celtics countless dunks, excessive lay-ups, uncontested point blank gimmies, and anything else Boston wanted as they blistered the Nuggets, 77-38, in just 24 minutes of play. Boston finished the half by making an unheard of 72% of their field goal attempts as they ran a coast-to-coast lay-up drill on the confused Denver crew. The Nuggets also committed 13 turnovers, were held to exactly zero fast break points, were dominated in second-chance points 11-2, and equally outmatched in points in the paint 36-16.
At this grim point in Nuggets history, the Big Three for the Celtics had combined for 47 points with Kevin Garnett already logging a double-double of 14 points and ten boards, Paul Pierce led the Celtics with 20 points, and Ray Allen quietly throwing in 13 for good measure.
Needless to say, the “Real Big Three” reside at www.greenbandwagon.com. And I’m not even going to add up the combined stats from the rest of the game because the statistical difference between the “Real Big Three” and the three players from the Nuggets that shall remain anonymous is just too drastic. I will tell you though that KG, The Truth, and Jesus Shuttlesworth combined for 71 points by the time all was said and done…
And to compound the misery, things didn’t get much better in the second half at all!
The Nuggets found themselves down by 41 at one point in the third period before salvaging barely a sliver of self respect in the fourth while losing by 26 points. I wouldn’t know anything about the second half, however, because I turned it off and held my hand above hot flame to dull my sadness. Seriously.
I didn’t think that this team could look this bad this early in the season, but the Nuggets are now on a three-game losing streak in the midst of a four-game east coast road trip and are now officially a losing team at 2-3 overall.
Go Nugg…. Ah forget it. That was as pitiful of a display as I can honestly recall.
Posted by Nugg Doctor at 8:00 PM

I'm watching the Nuggets get absolutely demolished by the Celtics right now, and one play sort of summed up the difference between the two teams. Perkins got fouled hard on the way to the basket, and almost before he hit the floor two of his teammates, Garnett and Pierce no less, were at his side helping him up. Now, I was at the Nuggets-Hornets game Sunday night, and when Linas Kleiza went down hard, falling from around rim-level to the hardwood, no one on the Nuggets even seemed to notice him writhing around in pain, let alone helping him up or checking to see if he was alright. Even worse, it's entirely possible (because it was almost impossible to miss the sickening thud of Kleiza falling eight feet onto his back) that no one on the Nuggets CARED. Everyone wearing baby blue (an apt color for this team, with all the infantile attitudes that litter it) was too busy wallowing in his own personal frustration. I couldn't believe it. I yelled at the Nuggets to go check on their fallen comrade, and still they just stood around. Pathetic. Unlike Boston, who have had a whole two months to get to know each other, the Denver Nuggets are not a team but a group of individuals. Camby, Nene, AI, even you Melo (at times especially you) seem to want to win. You play pretty hard most of the time (although your attempt to recover on defense after going for a steal against Crawford, at a crucial juncture of the game, was half-hearted at best). You even seem to like each other. But you play as a bunch of individuals and not as a team the vast majority of the time. Players stand around on offense and wait for the ball-handler to take on the opposing teams defense single-handedly, making what should be an explosive offensive team pathetically easy to defend in the half-court. The help defense is almost non-existent (apart from Camby) and even he refuses to show-up anywhere outside of the lane. Most frustrating is the consistent lack of focus, leading to bad turnovers, the aforementioned lack of movement on offense, and the fact that a defensive possession rarely goes by without someone making a mental error. Oh, you guys can focus for stretches--stretches of possessions, stretches of games--but not day in and day out, and I think that stems at least in part from playing for selfish reasons and not for your teammates. You guys don't seem to be selfish players, you just play selfishly. I know you guys can get it together, but it's not going to happen unless you start REALLY getting together and playing for one another.

Denvers Offense versus Boston =
1.Let AI Handle and hope he can make a Lay-Up.
2.Let Marcus Shoot Long Range (technically mid) [when will he learn to only shoot those when we are up? he ain't no shooter.]
3.Let Eddie toss up a brick 3 even though career wise he is not a shooter.
4. Stand Around and let ball handler go one on one.


This team Overall has NO HEART OR DISIPLINE When will the FO realize that Kleiza isn't the answer for threes, that Diawara isn't an all-star, that Eddie isn't a shooter, that Marcus isn't a shooter. WE NEED MORE DISIPLINED VETS!!!!!!!!!!!!!.

I line in Miami so I can only see the nationally televised games, other games I follow on ESPN Gamecast. As I couldn't see the game, I couldn't really tell where the Nuggs went worng. But from the box score looks like pretty much everything. You said it best yesterday just shows that the Nuggs are going to have a very very tough time with the elite teams in the East. For a team with so much talent, they seem to not be able to get it together.

Defense Defense Defense, don't know how many times that can be preached but over 70% against a team like the Nuggets, I don't think even Milwaukee has given that much up this year.

I don't know what needed maybe a defensive minded coach like Larry Brown. Or all practices from now should be on defense, 'Melo and/or AI can put up points any given night (for the most part) so team's focus should be on D.

Hey Nugg doctor you need to get an email link on your page. My site is looking for bloggers and we would be happy to get your blog on our home page if you will place an image link to our page on your site. Let me know my email is attached.

From TD Banknorth to the Verizon center is 450 miles...

If I were Karl I'd make the squad WALK there...

I feel your pain Doc. I was watching a VH1 "Driven" by the 2nd half. It looked like a dunk contest out there. I do have to say, KG looked like his MVP self out there.

That was just disgusting. Eww.

Are you kidding me that Nene is now sitting out with a frickin stubbed thumb??? This team sometimes...

Let me tell you something... I didn't even include that in my recap because it's just too funny. Strained calf, overweight, and now a jammed finger!

What else is new?

It's always the same! One excuse after another.

Well, so much for staying healthy -- 3 guards and Nene's torn thumb ligament later, we're in bad shape. K-Mart still isn't cleared for back-to-backs, even though he played decent minutes against the Celtics. I just hope Nene being out finally makes George use Steven Hunter, because that Melo/Najera-as-bigs lineup isn't gonna cut it against anything but a NellieBall lineup.

So 6 weeks and hopefully Nene and Chucky will be back. Anthony Carter is luckily coming back relatively soon, and hopefully Wilks is as well. If Camby goes down or K-Mart has a setback, we're officially hosed for the first 2 months of the season. Our defense is already bad enough with Nene -- having him gone makes it even worse, especially against bigger PF/Cs.

Speaking of Hunter -- what's the deal??? Aren't we paying that guy 3+ mil a year? Isn't he a legit 7-footer that can run the floor and (most importantly) is healthy? WTF George? Sometimes I think he doesn't adjust to anything. Hunter sat there against the Knicks while Nene and Marcus got into foul trouble and Melo/Najera were getting abused inside playing the 4/5 -- at least use him as another body to take fouls and clog the paint...

Anyway, George has been irritating me lastely. Just sitting there against the Celtics, laying back in his chair, not saying a damn thing. Aren't coaches supposed to do or say something when their team is allowing 72% shooting? He probably chewed their asses today at practice, but the offense is so stagnant, the defense is so bad, and George just sits there during games... He talks too much and acts too little -- all that talk of defensive gameplanning and "the offense will always be there" and thus far we have neither? The players need to do their part, but at this point, I'm starting to really question George's control of the team and his active participation and investment in their success. It seems like he's just checked out the past couple of years.

Thanks for wallowing in misery with me everybody, but I think we have blown this all a little bit out of proportion. Granted, this game was really, really bad, but the fact is still that it was on the tail end of a back-to-back on the first road trip of the season. Plus, we have nobody at point guard and two power forwards on the team are currently both at about half speed. If it had been a loss by only one it would still be a loss and the important thing is for the Nuggets to bounce back and return to .500 with a win against the Wizards.

I posted this over at nuggetshoops.com, but I'll post it here too. I think the Nuggets need to take lessons from a few other Denver teams.

First, I think they may need a new coach. But I also think they need a real, true, GM.

Look at the Avalanche. They had quite possibly the greatest GM in professional hockey and his skills as a GM brought them 2 titles. And it left the team for the most part in good shape to win a few more.

Then they could take a few lessons from Dan O'Dowd (Heh, imagine that, a true GM) and the Rockies. Build from within. I know its not as easy to do with the NBA and the D-League as it is with MLB and AAA, but still.

The Rockies made it all the way to the World frickin Series because they had a team of young talent that had already spent 2-3 years together before even reaching the pros.

I know some of you die-hard hoops fans wont like the comparison to other sports, but, I think the Nuggets could learn.

I personally like the comparison, Nuggs. It may not be as seemless across the wide board of sports, but it was a well thought out, positive insight.