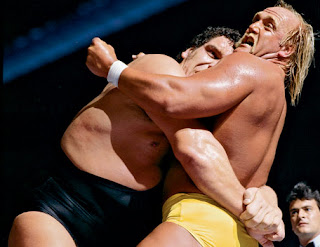 (Boulder-CO) Not since Hulk Hogan and Andre the Giant matched up at Wrestlemania III have I been more psyched for athletes who like to body slam each other to square off. That’s right, Nuggets Nation, it’s that time of year again and the Nuggets are going back to Madison Square Garden to get reacquainted with characters like Nate “The Instigator” Robinson, Mardy “The Goon” Collins, and gasp, Coach Isiah Thomas!
What a motley crew, right? But don’t forget about a few of the Nuggets' roles in the episode dubbed by yours truly as, “The Little Grapple in the Big Apple”.
We have the body slam artist himself, J.R. Smith, and the stick and move master, Carmelo Anthony! 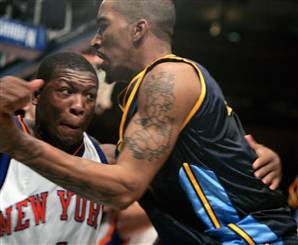 Seriously though, hopefully at this point we can all get a little chuckle out of the past in retrospection, but the truth about what happened the last time feelings hardened at the Garden was the Nuggets were derailed for about a month with the lengthy suspensions handed down to J.R. Smith and Carmelo Anthony and the NBA suffered another public relations black eye, pardon the pun.
And the last thing the Nuggets, Knicks, or for that matter, the NBA needs tonight is for anything close to resembling what happened on the eve of December 17th, 2006 to reoccur.
So here’s to a good clean fight, umm I mean, basketball game!
The 2007-08 Knicks are a team that could honestly go either way this year. They could vastly improve and maybe sneak into the Eastern Conference postseason or they could once again dwell in the basement of the division.
First off, the newly acquired and returning from injury Knicks have to step up. Their biggest off-season pick up was Zach Randolph and he is already paying dividends for the Knickerbockers. Z-Bo is averaging the only double-double on the team at 18 points and twelve boards nightly, but it’s guys like Quentin Richardson and Fred Jones that are going to have to get things going for this team to succeed.
Another critical point for the Knicks is consistent scoring. If this team could find a consistent 25 points a game it would greatly relieve some of the nightly uncertainty of where the offense is going to come from. We all know that Marbury can get hot, but lately it’s been less and less. Jamal Crawford is a guy that can spontaneously combust for 40, but he too can disappear from games. And from there, who do they turn to? Eddie Curry? David Lee? Bueller? Bueller? Bueller?
But the final and most critical point for the New York Knicks is to start finding positive things to rebuild the foundation of this franchise on. After a 33-49 season in 2006-07, Stephon Marbury and his oft-times zany antics, and after the off-season circus that was the Isiah Thomas sexual harassment case the Knicks just need to get the ball rolling in the right direction.
As for where the Nuggets are four games deep into this year’s campaign… Let’s just say that they have some issues still to deal with too.
For starters, the Nuggets have to catch a break with a healthy and productive running mate for AI in the backcourt. Anthony Carter is still recovering from a broken hand, Chucky Atkins has been unavailable due to a severe groin pull, and most recently Mike Wilks came up lame against the Hornets with a bad hamstring. J.R. Smith returning from his three-game suspension for, “conduct detrimental to the team” could be a spark, but I’m also wondering if Von Wafer or Bobby Jones are going to step up and seize the opportunity at hand.
Additionally, there is an opportunity to seize in the frontcourt. The competition is going to get stiff in a hurry between Nene and Kenyon Martin for the starting power forward spot. Both men are showing signs of improvement with each passing game and as each man gets stronger it is going to be a problem that George Karl and staff should feel fortunate enough to have to deal with.
Other than that, my final line is Nuggets by nine and be sure to check out my man Seth over at www.postingandtoasting.com for the best New York Knick-centric point of view in the NBA blogosphere.
Go Nuggets!
Posted by Nugg Doctor at 5:01 PM

Damn that article was really good and funny at that. keep up the good writes