Nuggets Too Tough for Wolves 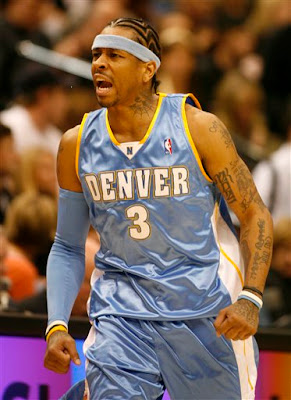 (Boulder-CO) I’m not so sure that last season’s Nuggets would have found a way to win this game. Denver had to hang around, fight to keep it close, and turn up the defense in the fourth quarter to get it done tonight at the Target Center, 99-91, against the new look Timberwolves in a game that shows just how much the Nuggets have improved.
Defensively, the Nuggets were anchored by the Captain, Marcus Camby. The Camby-man grabbed a game-high 21 rebounds, swatted six shots and altered countless others, scored 14 points, and found a way to dish three assists. He did an amazing job of locking down the boards and the rim in the fourth quarter with nine rebounds and two blocked shots and was the fuel for the Nuggets, 25-14, domination in the money period. Furthermore, this may be the best basketball I have ever seen the decorated veteran play.
Another Nugget who very well may be playing his best basketball as of yet is Carmelo Anthony. ‘Melo continues to give opposing defenses fits by abusing slower defenders off the dribble, posting up smaller foes in the blocks, and down right giving everyone who wants to try and stop him a ride on the ole “‘Melo Jab-Step Express.” He even hit a spinning - turn-around - fade-away that had the Altitude announcers using terms like, “Jordan-esque” and “Wow”. And once again Anthony finishes as the game’s high-scorer with 33 points, six assists, five rebounds, a steal, and a block.

His All-Star counterpart wasn’t too shabby either.
Allen Iverson continues to play extremely heady basketball for the Denver Nuggets and his 24 points, eight assists, three steals, and three rebounds were invaluable against a slew of Timberwolf point guards. AI is creating an abundance of easy opportunities for his teammates and continues to be the lightning to Carmelo’s thunder in the scoring column. His box score tonight may not be as impressive as opening night’s, but tonight he was indeed just as impressive simply because he finished with only one turnover. AI dished for 14 assists in game one, but he offset that high total with seven giveaways. But tonight he took care of the basketball for a much more favorable assist to turnover ratio in a game that needed to be controlled with a little bit tighter leash.
Up next for the Nuggets is a meeting with the New Orleans Hornets at home on Sunday night. Just like in tonight’s game, if the Nuggets are truly a contender they will find a way to beat the Hornets convincingly.
Now, if you don‘t mind… Allow me to analyze the first 96 minutes of Nuggets basketball. I have so many things to examine and so little time!
Go Nuggets!
Posted by Nugg Doctor at 9:30 PM

The nuggets are very good in this moments, but I think: "If we have 4 stars (Melo, AI, Camby and Martin)they didn't compenetred very weel" and I think that they will down.

Answer you are the best!!!