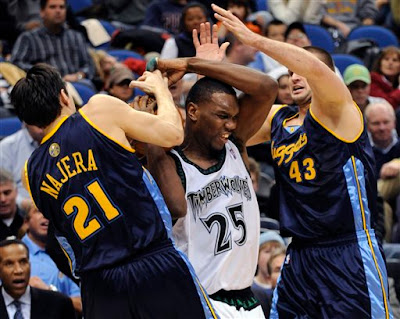 (AP Photo/Tom Olmscheid)
(Boulder-CO) The Denver Nuggets are now 3-0 this season against former division rival Minnesota and its Timberwolves. Denver came into this match-up on the tail end of back-to-back games after a huge win against the Spurs the night before and trampled the T-Wolves, 118-107, for only their second win on successive nights so far this season. On the other hand, Minnesota has lost seven straight games (and 13-14 spanning the month of December) and is looking like they might give the 1997-98 Nuggets eleven-win season a run for its money.
About the only thing that I can say wasn’t very good about this game was how the Nuggets would build sizable leads in the first six or seven minutes in the each quarter only to allow Minnesota to somehow tighten the game back up by the quarters end. In the first quarter, the Nuggets jumped all over the Wolves with a 12-0 start. Anthony Carter was playing fantastic, Carmelo Anthony also got out to a hot start, and the rest of the Nuggets were all being utilized in their appropriate manner. Unfortunately, Minnesota came roaring back and finished the quarter down by only five, 30-25.
In the second quarter, it was more of the same flashes of brilliance from the Nuggets, but just when the score would start to get way out of hand the Timberwolves would fight their way back into the game. At just under the four minute mark, Carmelo Anthony hit a long jumper to give the Nuggets a 14-point lead. I thought to myself, “Well, the Wolves are howling now”, but as soon as I thought Denver was going to extend their advantage to 20 or more points Minnesota would rally again and close the half only down nine, 61-52.
The purest Nugget at the half was Anthony Carter. AC (because everyone needs a nickname) was conditioning the Nuggets with a double-double at intermission consisting of eleven points and ten assists. Carmelo added 16 points and Allen Iverson chipped in 14 as the Nuggets looked thoroughly in command.
Entering the third quarter with a nine-point lead, Denver once again lengthened the distance between themselves and the Timberwolves to 14 points with less than four minutes remaining before allowing Minnesota to yet again go on a 14-3 run in the last two minutes to tighten the game at, 83-80. There needed to be a timeout called way before Coach George Karl signaled for one at the, 82-76, mark, but as usual George waited too long and the Timberwolves had already gained the momentum they needed. Against a team that is struggling to do much of anything right like the Timberwolves this may not seem like much to get distraught over, but it is this exact kind of game mismanagement that has proven time and time again to be costly to the Nuggets against superior teams. Games that Denver, perhaps, could have finished with a W frequently come to mind when I rewind the memories of the first 30 contests as this facet of the game plan still perplexes me as to why Karl refuses to, or is oblivious of, situations where calling a timeout is necessitated. However, I digress because as much as I sit and watch while begging for George Karl to assume a controlling position in games where, momentarily, the Nuggets lose said command. All the complaining in the world isn’t going to change the fact that Karl, in this realm of the job, is still failing the Nuggets time and time again.
In the fourth quarter it was the same old story for the Nuggets. A lead once as large as thirteen was widdled away to as little as six with just under three minutes remaining, but Denver again hung tough and pulled out the victory. Free-throws made and good decisions passing are the reasons why the Nuggets can hang their hats on this eleven-point victory, but had it been against a savvier opponent I’m not so sure that the result would have been as favorable for Denver.
The Nuggets had five player score in double figures paced by Allen Iverson’s 33 points and four assists. Carmelo finished with 26 points, four rebounds, and four assists. Linas sparked Denver off the bench with 17 points on 7-10 from the field, Marcus Camby swatted a game-high seven shots to fit nicely with his twelve rebounds and eight points, while Anthony Carter was the Nuggets only double-double of the night with 16 points, eleven assists, and three steals.
Denver has today to rest before former Nugget Andre Miller and the 76ers come to town on Sunday. It will be nice to watch Miller play again, but even nicer if the Nuggets can extend their 2008 winning streak to three games.
Go Nuggets!
Posted by Nugg Doctor at 7:56 AM

What up Nick! Good looking out on the Nuggets coverage once again.

I completely agree with you on George Karl. I really am beginning to wonder if he is the right man for the job. His game management is well...poor.

He sits for far too long when other teams go on runs, and a timeout is sometimes all that is needed to turn the tide, and squash the momentum. It astounds me how long he waits! He sometimes waits until the other team takes a lead, and that is after our team had a 10 or 12 point lead!

Plus his rotations leave a lot to be desired. In games were we need offense, he doesn't play the correct personnel. In games were our defense is struggling, you don't even see guys like Yak or B Jones take off their warmups, and they are by far our two best perimeter defenders.

I am telling you, if you look at the championship teams throughout history they all had good coaches. I really do not think Karl is the man for the job.