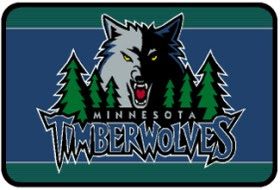 (Boulder-CO) Seriously, the Timberwolves are the NBA’s worst team at 4-27, they have lost twelve out of their last thirteen games including their last six straight, and the Nuggets have already beaten Minnesota twice this season.
The Nuggets are now 19-12 after last night’s win against the defending NBA champion San Antonio Spurs and are sitting atop the Northwest Division. Denver has won five out of their last six games and is just starting to get to a point injury-wise where we can start to really see what this team is all about.
The only preview you need to read is the Nuggets SHOULD win tonight in Minnesota. The Timberwolves have no answer for The Answer or ‘Melo and the Nugget frontline should have a field day against the Minnesota bigs.
The Nuggets Nation is behind you. Don’t let us down tonight against the league’s doormat.
Go Nuggets!
Posted by Nugg Doctor at 7:33 AM