Nuggets Scratch Out the 'Cats 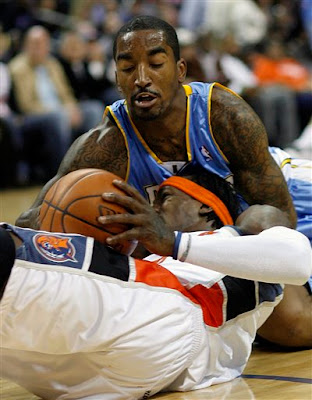 (Boulder-CO) The Denver Nuggets continue to roll since acquiring Chauncey Billups with the Bobcats serving as their third-straight win, 88-80, tonight in Charlotte. And what's scary for upcoming foes is how strong Denver looks so soon despite the mediocre play of its native son since his return.
The first quarter against the 'Cats could have been the worst played twelve minutes so far this season. The Nuggets opened up the game by allowing the Bobcats five offensive rebounds in their first four possessions while falling behind 8-0 out of the gate. And while nobody was boxing out it seemed like Charlotte was being dared to shoot uncontested three-point attempts too. Jason Richardson connected on two out of his first three from long range, and if it hadn't been for Raymond Felton, D.J. Augustine, and Gerald Wallace shooting a combined 0-6 from downtown the Nuggets may have found themselves down by more than six entering the second.
Thankfully, the energy of Renaldo Balkman and Anthony Carter was contagious as the Nuggets began showing signs of life in the second quarter after Balkman scored six of Denver's final eight points in the first off a pair of assists by AC. But Carter wasn't done dishing it out just yet and he would find dimes on three of the next five Nugget baskets as the Nuggets pulled within four at the end of the half, 46-42.
Please believe me when I say the Nuggets were lucky to be within ten at this point in the game considering the starters were a combined 9-23 shooting without a single player in double-digits. In fact, the only Nugget having an economical game in the first half was Renaldo Balkman who slashed and banged his way to ten points on 5-6 from the field. I also think the game's slow pace was favoring the Bobcats as the Nuggets had just six fast-break points.
The second half started as if the Nuggets were just on the edge of shaking off the jet lag. Carmelo had only scored seven points, Chauncey was struggling again shooting the basketball, and Nene had been unusually quiet both offensively and on the boards. However, you could feel that Denver was on the verge of breaking loose on their first possession of the half after Carmelo came up with a very heady pass to Nene that left the rim shaking. Denver would then quickly tie the game, 50-50, proceed to outscore the Bobcats by 13 points in the third period, and never look back as they handily controlled the rest of the game.
Carmelo scored 18 of his game-high 25 points in the second half on a very steady 10-19 from the field after starting the game a luke warm 3 of 7. Chauncey came around in the second half, despite still not having a great shooting night, to score 16 points largely in part to a perfect 7-7 from the free-throw line. Billups also dished out five assists without a single turnover and provided that much needed calm when Charlotte narrowed the Denver lead to just two points midway through the fourth quarter.
The Nuggets are now winners of three-straight games, above .500 for the first time this season, and will now face their first pair of major tests on the road. Up next are the 6-2 Cleveland Cavaliers on Thursday night before Denver faces reigning NBA Champion Boston Celtics on Friday.
Go Nuggets!
Posted by Nugg Doctor at 6:33 PM