Whistle Me for Traveling! 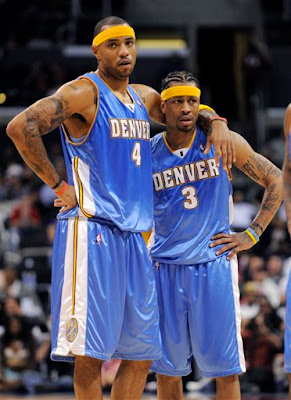 (Boulder-CO) I'm on the road in Lawrence, Kansas at KU and was unable to watch last night's tremendous overtime victory over the Clippers. But, from the recaps I evidently missed a great game.

Here are the high's and low's:

-The Nuggets rallied from 18 points down at halftime to force overtime and win, 113-103. In doing so, Denver tied the second-biggest comeback from a halftime deficit in the Nuggets' franchise history.

-After missing a last-second three-point attempt in the season opener, Kenyon Martin hit a HUGE three in overtime to secure the win. Martin recorded 13 points, 13 rebounds, and two assists despite missing nine of his first ten shot attempts.

-Marcus Camby didn't play due to the bruised heel that kept him out of game one of the season as well.

-Six Nuggets scored in double figures led by Allen Iverson's 25 points and five assists. Nene added 22 points and eleven boards, Anthony Carter chipped in a dozen points and half as many assists, J.R. Smith did his usual thing finishing with 17 points and ten rebounds, and Dahntay Jones scored 13 points and swatted a shot.

-Denver grabbed a total of 60 rebounds. Ten more than the Clippers and out-passed L.A. 19-17 in the assist column. Half of Denver's 38 made field goals were assists.

The Nuggets open up their doors for the first time of the season tonight at Pepsi Center against the same team that ended their season last year. That's right, Kobe and Co. are in town and it's the first back-to-back set of the year. Oh, and Carmelo is back! 'Melo has served the team's two-game suspension for DUI late last season and will return to the starting line-up.

Something tells me tonight's game is going to be electric.

The Nugg Doctor was just outside of KC and didn't let H8torade know?

My bad, holmes! I forgot you have H8troade's home base in Kansas. There will be a next time and the first H8torade/Nugg Doctor meeting of the minds for sure!