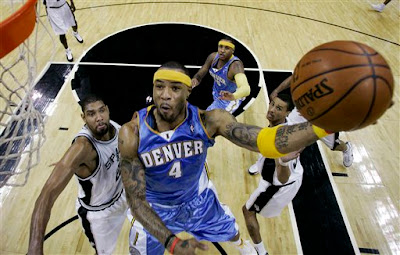 (Boulder-CO) As the Nuggets continue to roll up the victories the bar continues to rise. Just how good did the Nuggets become after trading Allen Iverson to the Pistons for hometown hero, Chauncey Billups? Well, good enough to beat the perennial Western Conference powerhouse San Antonio Spurs last night, 91-81, on their home floor. As for how good they will be? We're going to know on Friday night when Denver takes on the 8-1, best record in the Western Conference, Los Angeles Lakers.

The first quarter in the Alamo City was quite basic. Jacque Vaughn still can't guard Chauncey Billups. Michael Finley can still elevate and shoot. Carmelo Anthony and Bruce Bowen still don't like each other. And Kenyon Martin and Tim Duncan are still a great match-up to watch. Denver played solid defense, per recent expectation, and led 22-21 after twelve minutes of action.

It wasn't until the start of the second quarter that Denver upped the ante defensively to hold the Spurs to just four points in the first six minutes while the offense - led by reserves Anthony Carter, Renaldo Balkman, and J.R. Smith - reeled off a dozen points to open up, 34-25, lead. Two back-to-back turnovers by way of Carmelo Anthony trying to push the fast break a touch too hard didn't stop Denver from continuing to win the quarter, 28-19, to enjoy a 50-40 lead at the half.

I've really enjoyed how the Nuggets have sustained their level of defensive intensity in the last few games and the second quarter against the San Antonio Spurs is a perfect twelve minute microcosm to serve as to why. I've already detailed how Denver held the Spurs to just four points in the first six minutes of the second half, but when the full quarter is dissected it really was a superb stretch in which the Nuggets did practically everything correct. Denver was active in rotation and didn't allow any uncontested three's. J.R. Smith played excellent one-on-one defense on Roger Mason and Michael Finley. Everyone did a great job playing one pass deny and as a whole Denver just made the Spurs work extremely hard for everything they wanted to execute.

Then as a bonus treat Denver completely suffocated San Antonio in the third period! Now, I understand that San Antonio is without two great offensive players in Manu Ginobili and Tony Parker. And I also know how hard it is for a team to operate efficiently without a true point guard, but I haven't seen a beating like the third quarter since someone put a banana in my pants and turned a monkey loose! The Nuggets ended the third with an 11-1 run, including a scoreless final 3:24, after allowing the Spurs a mere 13 points prior to a Bruce Bowen free-throw with six seconds remaining. For the quarter, Chauncey Billups and Carmelo Anthony combine for 18 of Denver's 25 points to hold commanding, 75-54, lead entering the fourth quarter.

Once the final twelve started to dwindle Coach Karl put on the cruise control with his reserves. With the Lakers on Friday night, it was nice to see Denver's starting five getting some much deserved rest even if it meant allowing the Spurs to trim back the Denver margin of victory to just ten points.

Pacing the Nuggets was the duo of Carmelo Anthony and Chauncey Billups. Chauncey led all scorers with 22 points, six assists, five rebounds, a steal, and a block and Anthony flirted with a triple-double with 21 points, nine rebounds, and seven assists. Surprisingly, Denver's bench combined for just 14 points after averaging 33.3 points in the last three games.

Friday is payback time for the Nuggets when they face their second great test of the season against the Los Angeles Lakers.