So Much For Feelings 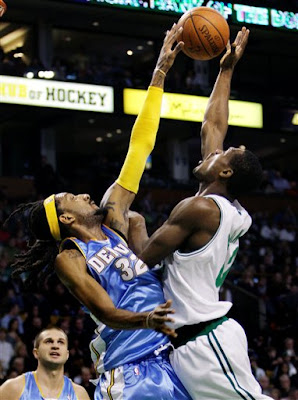 (Boulder-CO) These Denver Nuggets never cease to amaze me. After playing one of their poorer games so far this season against the Cleveland Cavaliers just 24 hours prior, they marched right into the Boston Garden and stun 19,000 Bean Towners by beating the Celtics, 94-85. The home loss is the first for the Celtics this season and serves as the first true feather in Denver's cap this year.

It must be some kind of hex the Nuggets are fighting because they once again started out another game by spotting the Celtics an 8-0 lead. Hex aside, I thought the Nuggets did a great job of fighting back and it serves as no surprise that it was Denver's calm captain, Chauncey Billups, who rallied the team with seven of Denver's first nine points. Once the initial bleeding was stopped, I feel Denver outplayed Boston overall for the quarter despite still trailing at the end of the period, 29-23.

If the starters played well in the first quarter then the bench played spectacular in the second! Denver's subs scored eleven of the team's 25 points in the quarter, but it was their defensive intensity that really set the tone for the Nuggets taking a, 48-42, halftime advantage. Renaldo Balkman was once again the key to the Nuggets overcoming their first quarter deficit by doing all the little things like boxing out, hounding his man on first pass denial, and making sure that no loose ball wasn't fought for. On one occasion, he not only controlled a tipped pass that would have surely went out of bounds had he not tip-toed the baseline, but also found a way to get the ball to Anthony Carter, who then tapped it to Chauncey Billups, who then spiked it to a streaking Carmelo Anthony for an easy dunk! It was a perfect bump, set, spike that made former Olympic Gold Medal winning Volleyballer, Chris Marlowe proud from his court side seat announcing the game!

All kidding aside, I really do chalk up Denver changing the game's momentum in the second quarter to Renaldo Balkman. His four points on two deep two-point field goals, two offensive and five total rebounds, a steal, a block, and an assist all came in the second quarter and served as the tinder to start the Denver fire. And as a whole, a lot of credit has to be given to the Nuggets' subs who outscored Boston's bench 11-3 in the first half.
Then came the most bizarre third quarter I've seen the Nuggets play since I haven't missed a game dating back six years ago. With a six-point halftime advantage, the Denver Nuggets would extend their lead in the third quarter to 15 points after coming out of the locker room hot and putting an 11-2 run on the Celtics. At this point, Denver had the entire engine firing on all cylinders before a catastrophic breakdown akin to transmission failure struck. With the lead, 59-44, and over eight and half minutes to play in the third, the Nuggets finished the quarter with only five more points as the Celtics regained the lead, 65-64.
At this point I thought to myself the Nuggets had pushed themselves to the limit too soon in the game and would proceed to concede the game to the Celtics in fourth quarter. But I hadn't learned my lesson from the first half, and when the going got tough, George Karl went back to the unit that delivered Denver its original lead in the first half.
It all started with J.R. Smith entering the game with one minute to play in the third quarter. Smith made good on an illegal defense technical free-throw at the end of the third period before scoring another six straight points to start the fourth. His substitute sidekick, Linas Kleiza, added another five straight points before J.R. bookended a 14-5 run to jump start the Nuggets' fourth quarter with a three-pointer from the wing that gave Denver a, 78-70, lead.
The Celtics had one final offensive push in them down the final seven minutes of regulation, but the sound halfcourt offense of the Nuggets held them at bay despite allowing Boston to once again tie the game at 84 with just three minutes to play. And who says their isn't any D in Denver? With the game on the line and the Bean Town faithful making their presence felt in the Garden. Denver shut down the Celtics and closed the game on a 9-1 run after a late Patrick O'Bryant free-throw was made long after Celtics Coach Doc Rivers had waived the white flag of defeat.
The well-balanced boxscore includes six Nuggets reaching double digits in scoring led by Carmelo Anthony and Chauncey Billups each with 18 points. 'Melo added a season and game-high 13 rebounds and Mr. Big Shot a game-high seven assists. Kenyon Martin finished with 16 points and four boards despite scaring the bejesus out of me in the second half when he slipped and hit the deck awkwardly in a fall that reminded me of the freak incident when he broke his femur in the Conference USA Championships back in 2000. Luckily, Martin would walk off the scary fall as the Nuggets Nation breathed a simultaneous sigh of relief. Nene added 14 points and seven rebounds while J.R. Smith and Linas Kleiza each scored ten off the bench.
Up next for the 5-4 Nuggets is a two-game homestand starting on Sunday with the Minnesota Timberwolves before the Milwaukee Bucks come to town on Tuesday.
Go Nuggets!
Posted by Nugg Doctor at 7:34 AM

I caught the second half of this game while flying Frontier back from a conference in Vegas - Frontier + DirecTV + ESPN telecast = several Nuggets fan on plane cheering. There were times in the fourth especially when Nene ripped that ball out that I couldn't help but to cheer out loud - and I wasn't the only one.

Great, great game. Was fired up for the Nuggets.