Mr. Big Stuff, Who Do You Think You Are? 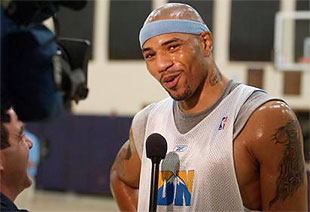 (FortCollins-CO) Just who does Kenyon Martin think he is? He walks out early from games, he allegedly can’t handle the territory of the professional athlete to fan relationship, plays when he feels up to it, and doesn’t know how to handle himself with the media. Kenyon Martin is just way out of tune this whole month of February.

The last subject of the aforementioned laundry list of complaints is product of Kenyon Martin’s conduct with a member of the Colorado Associated Press. Dino Costa of the Radio Colorado Network is the most recent person to obviously get Martin’s goat. Costa was trying to get a statement from Martin after he had played great and scored 34 points on Friday in the win over Dallas. What he got was an ill-tempered Martin and a subsequent verbal altercation.

Martin told Costa to get away from his locker while he finished dressing when first approached by the reporter. Costa asked him to repeat what he said and was then subject to Martin’s obscenities. The men then had another altercation after Costa was forced to leave the locker room by Nuggets personnel.

So this journalist wants to know just who do you think you are Kenyon? You play one good game and now you’re not even available for comments or questions. You’re not even the best player on the Nuggets. You should be happy to talk to reporters about your momentary success and treat them with some decency. Martin did add this, with his glamorous repertoire of vocabulary, in a statement regarding the incident with Costa. Martin stated, “That is why I play, so I don’t have to listen to you all’s mouths.” I’m surprised that he didn’t add a typical, “Know whadamean.”

I don’t know if this is the way an under achieving, overpaid, and angry athlete makes his way out of town. But I sure hope it is. We don’t need a guy like this on our team. Between his walking out early of games, sporadic playing schedule, and locker room antics I just don’t see it all adding up to a positive environment for the Nuggets. Does anyone know why Martin needs to personify this bad boy character? I sure do wish I knew the answer. However, there is one answer that I do have. It is trade Kenyon Martin before its too late. Get someone with an ounce of professionalism in here instead of Mr. Tough Guy.
Posted by Nugg Doctor at 10:58 AM

Wow big ax to grind with kenyon. He had a good game, give him a break. What? Your mad 'cause he cussed out Dino "I stole my whole act from Jim Rome" Costa? Man i'll fucking cuss out Dino Costa.

"glamorous repertoire of vocabulary" What the fuck is this suppossed to mean? Who the hell has a glamorous vocabulary?

"I’m surprised that he didn’t add a typical, “Know whadamean.”" Whats typical is your response to a black man getting paid well and still having an attitude. What he should just shut-up and be happy he has a job? What you want him to tip-toe around reporters feelings? Or bow down to "know-nothing about sports" sports journalists? He's suppossed to respect some journalism major who wants to critique his performance?

Fuck that, K-Mart don't owe no one nothin'.

What your gonna make a comment now on my grammatically incorrect language?

Nugg Doctor said...
This comment has been removed by a blog administrator.
10:27 AM

Your exactly right pizza, he doesnt OWE anyone anything. The media provide Kenyon Martin an opportunity to speak to his fans around the nation. It is purely a mutual interest relationship. However, he should be accountable for his actions. And he should be able to act with a little more professionalism. No one is being crucified over the scandals, they are minor, but it is still disappointing because as I have previously said, I was, and still am, a Kenyon fan. I believe that race has nothing to do with class and I dont recall ever bringing up K-Mart's race, you did. Kenyon Martin is known for repeating the aforementioned saying. "Know whadamean" pizza?

Did you watch the game against Seattle? Melo did exactly what I said he would do. Show up Ray Allen on his home floor and walk out with the win!

So much for knowing nothing...

Who is your team pizza, or are you from a city that isnt fortunate enough to have a basketball team? I ask because you never really have anything to say about basketball.

I agree with you doc, Pizza just likes to try to agitate you. I luv the way you stick it to him. The nuggets looked pretty good in overtime last night.

PizzaDaHutt said...
This comment has been removed by a blog administrator.
12:40 PM

That "know-nothing about sports" sports journalist i was talkin about was Dino Costa but if you want to lump yourself in with him be my guest.

The team I like is any team who has Ron Artest. I have always liked spoiled rich black guys who still act ghetto in order to make white people uncomfortable. I used to be a big fan of Spreewell but he's gotten a little too civilised.

Hey, how about your boy Camby? Heard he missed 15 games 'cause of a booboo on his pinkie, then he asked to not play because he slept wrong the night before, and then he gets hurt and sits out the last 8 minutes of the game. Talk about a competitor.

In Reply to Pizzadahutt's Comments:

Seems like the racial stereotypes are all on your end pizza. "Spoiled rich black guys that still act ghetto," doesnt sound like the same person that said "typical response to a black man getting paid well and still having an attitude." Many of these players have attended and graduated from prestigious universities and colleges. The Doctor is just a little bit ol' school and expects professional athletes to act like the roll models they are.

Nugg Doctor said...
This comment has been removed by a blog administrator.
12:45 PM

Marcus Camby has had injury problems all year long. Furthermore, Surgery is hard to come back from at the same level you got hurt at. Recooperation takes time. Bottom line is this... Marcus is our most defensive minded player and we need him whenever he is ready. To question his competitive spirit is blasphemous.

"Surgery is hard to come back from at the same level you got hurt at" - i never mentioned his surgery, he missed 15 games 'cause he hurt his pinkie.

Marcus Camby had pins put in his wrist. That is the injury that kept him out so long.

If Martin was putting up any sort consistent numbers, he would get the same respect. Martin has missed his far share of questionable games too. How do you sit Wednesday, and the score 34 on Friday? I'm eagerly awaiting this answer...

So far this season Camby has missed games because of a sore foot (plantar faciatis), twisted ankle, bone bruise, and a broken pinkie. Thats a laundry list of injuries that i think entitle him to be called injury prone.
I like Camby and think he is a great player, but i still think he babys himself (and if your playing to not get hurt, you inevitably get hurt), unlike the great Elgin Baylor. Did you notice his kneebrace? He broke his knee-cap in the playoffs in '65, and just slapped on a kneebrace and played six or seven more years. A real tough guy with killer sideburns to boot no less.

CRAZY. This article sums up exactly how I feel. I cant believe Martin has the audacity to act the way he is. Is it even a question of how good he is to justify his antics and behavior? I dont think so, I think it has more to do with the fact that regardless of how good you are, whether its music, sports or art, you should NEVER get cocky and act as if you dont have time for the people who admire and support you. Is he crazy? People are un real man. I like your insight, maybe we can get more info later on how he really feels and thinks. That would be great Dr. Nugg.