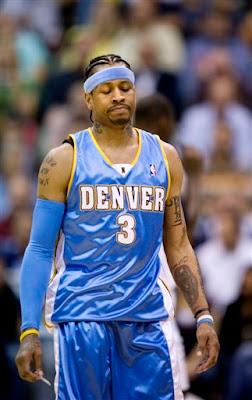 (AP Photo/Douglas C. Pizac)
(Boulder-CO) Opening night's game was a bit of a disappointment. The Denver Nuggets lost to the Utah Jazz, 98-94, after playing a hard fought game without a suspended Carmelo Anthony. And while Denver was down by as many as 14 with less than two minutes remaining in the third quarter I do acknowledge the gusto they showed in not letting this game slip into blowout city, but too many disappointing factors contributed to this loss.

1. J.R. Smith is a freaking monster! Smith finished with 17 points on 7-14 shooting that included 3-7 from downtown. He added five rebounds, two assists, and a steal while playing solid defense and showing a multi-faceted offensive repertoire. I especially like the way he is finishing with his left hand around the basket.

2. Allen Iverson recorded eight assists while only shooting the ball 13 times. AI may have only scored 18 points in what was a very un-Nugget like offensive showing, but his curtailing of dribbling out the shotclock gives me hope that he understands what this team will need from him to be successful. Plus, Iverson only turned the ball over three times.

3. Kenyon Martin worked to his offensive strengths. He made quick moves around the basket and powered his way to a lot of high-percentage buckets. I absolutely love Marting shooting that little jump hook with the right hand off of one or two power dribbles because he is still one of the quickest elevating off of the floor in this league. Kenyon finished tied with Allen Iverson with a team-high of 18 points.

4. Denver limited themselves to only 13 turnovers. That's quite a bit fewer than last year's average and a good sign of discipline offensively.

Now for the negative:

1. Anthony Carter has got to take better care of the basketball. The boxscore will tell you that he only turned the ball over once, but I counted three straight possessions where he lost control during the Nuggets final push that absolutely crippled Denver's chances of winning the game. Statistically, maybe they weren't turnovers, but I'll guarantee you Carter was thinking about that stretch on the plane ride to L.A.

2. Nene has got to put that big body on someone when the ball gets shot. Big Brazil finished with only four rebounds and no Nugget finished with more than six. As a team, Denver was mutilated on the boards 46-35 with many of those rebounds translating into second chance points for the Jazz.

3. In the first half alone, Denver allowed 36 points in the paint. The Jazz would finish with 52 points in the paint in total indicating that there was a halftime adjustment, but the matador defense has got to stop or this is going to be yet another year of defensive futility for the Nuggets. Too many times the on-ball defender for Denver got beat and when the help came the defender who was beat initially did a poor job scrambling to help the help which leads to easy drop passes around the goal and thus all the points in the paint.

4. That lane violation called on Kyle Korver's second free-throw attempt is about as soft a call as your going to see in today's NBA. Had the referee choked on his whistle, Denver is only down by two and the Nuggets' options to tie the game are many. How's that home cookin' taste, Utah?

5. Kenyon Martin taking the last ditch three-pointer to tie the game was baffling. Why the ball wasn't in J.R.'s hands will be a question on my mind for days to come.

The important thing is for Denver not to dwell on the loss and get back even tomorrow night against Marcus Camby and the Clippers. Splitting games without Carmelo isn't so bad, but heaven forbid the Nuggets lose to the Clippers and then have to see the Lakers without having won a game.

Go Nuggets!
Posted by Nugg Doctor at 7:22 AM

To answer your question, the home cookin' is delicious from this side of the rockies. Your boys played well, but it looks like another year of fighting for second place in the division for the Nuggets. We gave you a shout out on www.thecowhideglobe.com this morning. We'll have to have you over for a visit the next time our teams tangle.

Thanks for the shout! Definitely hit me up next time and we can havea three-way trash-talking sessino with True Blue Jazz. In the meantime I'll add you to the blog roll.

mmmm mmmm so good...nuggs played much better than i expected. the korver call was legit...k mart taking that three at the end of the game was not. a collective "nooooo!!!!!" was heard echoing throughout denver.

Nugg Doctor, another negative was the lack of confidence from LK - 1-8 shooting, 0-4 from behind the arc. He looked petrified to shoot out there.