Nuggets Split Over the Weekend 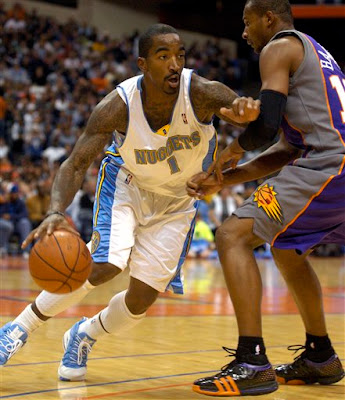 (AP Photo/Kevin Rivoli)
(Boulder-CO) The Denver Nuggets played familiar preseason foes in not so familiar venues over the weekend and were able to split their chances for victory while improving their record to 4-1. Denver first played the Suns, in Syracuse, for a homecoming of sorts for Carmelo Anthony in which they were victorious, 94-91, on Friday before taking on the Minnesota Timberwolves, in Bismarck, North Dakota, and losing, 111-107, on Sunday.

In the Phoenix match-up, the Syracuse fans were nothing short of gracious to Carmelo. From the opening introductions to chanting, "We want 'Melo" late in the third, their positive vibration could be felt on the Nuggets side all night. And for their appreciation of Carmelo-past and Carmelo-present, Anthony did not disappoint. 'Melo scored 14 points in just 24 minutes while adding nine rebounds, five assists, and two steals.

But, once again, the brightest Nugget continues to be J.R. Smith. The Prodigy led the Nuggets in scoring for the fourth-straight preseason game with 19 points, five assists, three rebounds, and three steals in a quick 24 minutes of burn off the bench. If at this point he hasn't secured his place as the first Nugget off of George Karl's bench then I'm not sure what else this young man can do to ensure so. J.R. has seemingly turned the proverbial corner and his basketball IQ has caught up to his other-worldly physical gifts with the results having made me just a touch giddy. Because the way I see things... Allen Iverson needs to become more of a passing floor general anyways with a guy like J.R. Smith picking up his scoring void giving Denver an ideal starting backcourt this season.

The rest of the game was pretty mechanical for Denver. Linas finished with eleven points and three rebounds, and Anthony Carter was the only other Nugget to finish in double-digit points with ten. Steve Nash, Amare Stoudemire, and Alando Tucker DNP'd for Phoenix while Chucky Atkins, Steven Hunter (what else's new), and Kenyon Martin (coaches decision) DNP'd for Denver. 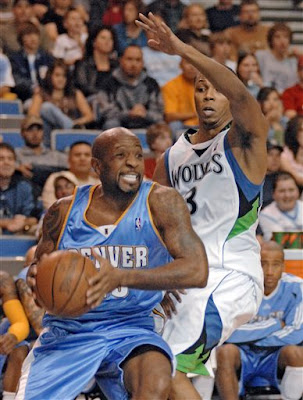 In Sunday's match-up with the Wolves, the Nuggets finally took their first L of the preseason after Kevin Ollie made four free throws in the final 16 seconds to cement a, 111-107, Denver defeat. The game could have gone either way, but ultimately the Denver defense cost them the game.

However, this loss was good for the high-flying Nuggets because it proves that when they allow a team, even a rebuilding team like the Timberwolves, to shoot over 50% from the field that they will most likely lose. Minnesota finished the game with a clip of 52.6% shooting on 27 assists (led by Randy Foye's 15 dimes) while five Timberwolves scored in double-figures.

Sure, the boxscore indicates that Denver finished with six double-digit scorers led by Anthony Carter's 17 points and seven assists, but when the defense isn't there the W's are going to be few and far between.

Allen Iverson did not play due to a tweeked right ankle suffered Friday against the Suns.

Next up for the Nuggets is a trip to Canada to take on the Toronto Raptors on Tuesday. Once again, the game is not televised so be sure to check back tomorrow for a preview and recap of the action.