3 Straight Losses Have Me Worried 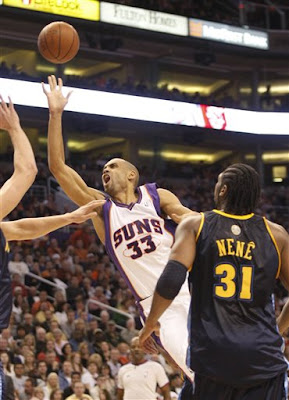 (Boulder-CO) For the first time this season, the Nuggets are losers of three straight games. Carmelo continues to slump offensively, the Nuggets can't defend against true size in the middle, and for the third straight game Denver has not been able to eclipse the 20 assist mark.
And can someone please tell me why J.R. Smith can't get a start?
Against the Suns in the first half three things became more apparent to me than ever before about the Nuggets current state of affairs. For starters, Carmelo Anthony has become lazy on offense. He's rarely attacking the basket anymore off the dribble and the results are defenders laying off of him and then closing quickly to bother his jumper. His lack of aggression in the last three games has also taken a toll on his free-throw attempts and against the Suns he shot just four attempts from the charity stripe en route to a ten-point, one rebound, and two assist night. Yuck!
The second thing that has really been highlighted in the last three games is Denver's inability to defend opposing centers of any true size. The Suns big tandem of Amar'e Stoudemire and Shaquille O'Neal, much like Yao Ming and Ilgauskas, both had great performances against the Nuggets. Amar'e double-double of 27 points, ten rebounds, two assists, and two blocks was more than Nene could handle and when combined with Shaq's 19 points and nine rebounds the Suns dominated the points in the paint as they combined to shoot 18-31 from the field. But in all fairness, Nene did have a good game consisting of 20 points and 15 rebounds.
The final thing that has me bah humbug is J.R. Smith not starting. I've laid off the topic for awhile now, but it's performances like last night's team-high 23 points (18 in the first half alone) that make me wonder what George Karl is thinking still starting Dahntay Jones. And let me say that I'm not knocking Dahntay Jones because I do think he is a valuable asset to this team, but J.R. Smith typically having to play the role of one-man comeback isn't helping his game the way playing with the first unit on a more consistent basis would.
With all that said, the Nuggets really let a golden chance to beat a very good Phoenix team on the home floor slip away. The Suns' lead was just three points as the fourth quarter started and the Nuggets immediately took control of the game with a 7-0 run in the first three and a half minutes of play. Two ties, and a Grant Hill lay-up later and the Suns had regained the lead for the final time as the Nuggets could only muster five points in the final five minutes of the game. And what made things worse has how frazzled the Nuggets looked offensively with the game's outcome in the balance as the best shots the Nuggets could get were all perimeter jumpers.
Chauncey Billups scored 18 points and handed out eight assists, but his uncharacteristic seven turnovers and only three free-throw attempts made Steve Nash's eleven assists and only three turnovers that much harder to swallow.
Now the Nuggets have a real challenge of ahead of them as they will face the Trailblazers, who are now tied with the Nuggets for the lead in the Northwest Division, on back-to-back nights starting tomorrow at home before traveling to Portland on Tuesday.
Posted by Nugg Doctor at 6:00 PM