Coup of the Kings 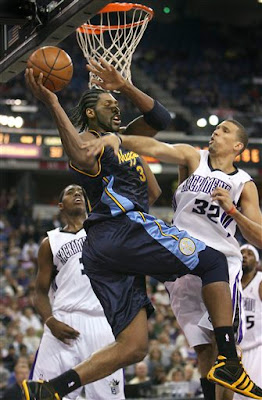 (AP Photo/Steve Yeater)
(Boulder-CO) It didn't matter that Kenyon Martin took the night off to rest a sprained wrist because the Nuggets are like a Great White Shark. When one of their sharpest teeth falls out another just replaces it. And in the case of last night, Renaldo Balkman was that tooth as the Nuggets completely destroyed the Sacramento Kings, 118-85.
The game was close for about the first 1:45 before Denver swiftly assassinated the Kings. Within a matter of one single minute, Nene scored nine points off of a lightning quick spin move on Brad Miller capped off by a beautiful lay in, back-to-back steals off of errant Sacramento passes finished off with gliding slams, and another rim-rocking flush from a Renaldo Balkman dime plus the foul to give the Nuggets an, 18-6, lead of which they would never relinquish.

And to be perfectly honest with you, the rest of this game was a complete laugher. The Kings knew they were beat and played content to just lose. The Nuggets found lightning in a bottle in the form of a, 37-18, first quarter and continued to dominate the rest of the game without too much resistance. Sacramento finished shooting just 29.3% from the field (29-99) and if there was one area that the Nuggets should be ashamed of themselves it's on the defensive glass. The Kings grabbed 26 offensive boards while not a single Nugget reached double-figure caroms.
Nene's performance was simply savory. Big Brazil finished with 16 points, seven rebounds, five steals, three blocks, and two assists in just 24 minutes of action. He made his outside jumper from the head of the key, showed superior footwork in the low blocks, and played the passing lanes fantastically as he made Brad Miller and Spencer Hawes look foolish whenever they tried to stop him.
Chauncey Billups rebounded after a miserable night against the Spurs to conclude his outing with a game-high 24 points and four assists. Against the Spurs, Billups failed to get to the free-throw line and on a night where he didn't shoot the ball very well it really left the Nuggets at a disadvantage in the boxscore. But, against the Kings Chauncey was 9-10 from the charity stripe and 6-9 from the field which included 3-4 from downtown. So much of Chauncey's offensive brilliance stems from him getting to the free-throw line, where he is one of the best in the league, and last night's performance serves as a perfect example of that.
Renaldo Balkman, starting in place for the resting Kenyon Martin, was also a major contributor. Balkman played 31 minutes scoring a season-high 17 points while filling out the rest of his boxscore with six rebounds, three steals, three assists, and a block while providing the Nuggets with his patented energy and athleticism. What I really like about Renaldo is regardless of whether or not the ball is falling for him he is going to leave a positive effect on the game in one facet or another and that is a very valuable tool for a coach to have on his bench. The only question is how does George Karl find a way to utilize a guy like Balkman night-in and night-out with as talented as a team as the Nuggets are.
Carmelo Anthony and J.R. Smith each finished with 16 points, Chris Andersen chipped in eight points, five rebounds, and four blocked shots, and Linas Kleiza's eight points and five rebounds rounded out things out for Denver.
Dahntay Jones also deserves mention for his shot blocking. Once again, Jones found a way to perfectly time a weak side block, or should I say annihilation, of a Brad Miller turnaround that could have only been better if he just caught it! With perfect timing, Dahntay skied for the block of which he promptly spiked to the floor in dramatic fashion. It may have only been a single instance of defensive prowess, but these kinds of plays made on a consistent basis are what makes a team more than a collection of talent. They give reason for fellow teammates to cheer for their brethren and when you feel like your team wants you to play well it's a lot easier to do so regardless of what your overall role on the team is. I call it the Brian Scalabrine effect. Obviously, the Celtics do not rely on Scalabrine as a major contributor, but just the fact that he knows everyone one the team is behind him makes his contibutions seem that much more important and thus makes a guy like Scalabrine, or Dahntay Jones, feel that much more a part of what the team is trying to accomplish.
Up next for the 14-7 Nuggets is some much deserved rest until Wednesday when the Timberwolves come to town for the third of four meetings between the two teams.
Go Nuggets!
Posted by Nugg Doctor at 8:16 AM

Makes up for an otherwise poor weekend in the Rose City. Ugh. I miss my San Juan mountains.

Been reading that Orlando is looking into Chucky Atkins. Who would we want in return? Would they give up Tony Battle? Seems like he would be a fair backup. What's his story?

Given how well Dhantay Jones and Balkman and the rest of our runners have been, what's the latest with Sonny Weems? Is he healthy? Are we sending him to the 14ers? Any news would interest me.