Houston: You Have a Problem 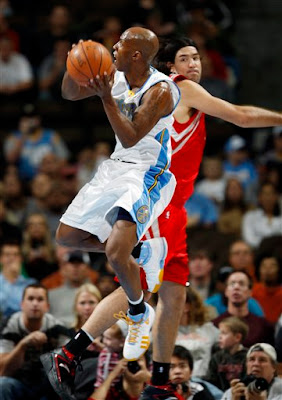 (AP Photo/David Zalubowski)
(Boulder-CO) Cliche title aside, do you love the way I previewed this game precisely the way it unfolded? Please, no applause just your unfaltering adoration will be enough! The Denver Nuggets grounded the Rockets last night, 104-94, at Pepsi Center to cap off their fourth win in five nights. Unfortunately, Denver had to do without Carmelo Anthony due to 'Melo suffering a contusion on his left elbow in the first half of which he did not return from.
In the first quarter, I was worried the Nuggets might have missed the scouting report after Nene picked up his first foul guarding Yao Ming 13 seconds into the game before settling for an 18-foot jumper on the other end. Thankfully, the foul and the poor shot selection were anomalies because Nene steered clear of all other ticky-tack whistles and used his speed advantage on Ming the next time down the floor to spin around Yao and get an easy lay-up. Big Brazil finished the quarter with six quick points, including a monstrous cram on a Carmelo Anthony assist that had the Pepsi Center percolating!
The second quarter was all about J.R. Smith. The well-rested Prodigy missed his first three-point attempt of the game in the first period, but that didn't deter him from scoring 13 points and handing out three assists in the second quarter alone as the Nuggets opened up a four-point advantage at the half. His highlights included a spectacular up-and-under reverse that left Carl Landry scratching his head and back-to-back three's to give the Nuggets the lead of which they would never relinquish.
After the break the news that Carmelo Anthony would not be returning after his elbow collided with Luis Scola's face was delivered and the Denver Nuggets were going to have to find a way to compensate for the loss.
No problem.
Denver still had the hot hands of J.R. Smith and Chauncey Billups.
The third quarter opened up right where J.R. left off with he and Billups hitting on back-to-back three's followed by another trey by Chauncey just moments later. The quarter was all Billups as the Denver native hit three three's altogether en route to scoring 14 points and handing out four dimes in the third! He once again put the team on his back when they needed him and when he has the help of Kenyon Martin hitting a three, Chris Andersen and Dahntay Jones absolutely trashing Houston shot attempts around the goal, and the rest of the Nuggets all playing heady it was like Denver never skipped a beat after the loss of Carmelo. And with the all-around stellar play, the Nuggets were ahead by ten, 78-68, entering the fourth quarter.
All Denver had to do was trade baskets with the Rockets to win and with another ten points from Mr. Big Shot the Nuggets cruised to a, 104-94, victory. Billups was relentless offensively with a new season-high of 28 points, ten assists, four rebounds, and two steals while only turning the ball over three times. J.R. Smith finished with 19 points on 5-9 from downtown, snagged five rebounds, and slid four dimes into teammate's pockets in another fantastic outing after having played limited minutes the game before.
The Nugget bigs did a great job on Yao defensively and the combination of Nene's 17 points and ten rebounds, and Kenyon Martin's 15 points, four rebounds, four swatted shots, and three assists more than countered Ming's team-high 18 points and eleven boards.
But this recap wouldn't be complete without mentioning the impact Chris Andersen made with four points, six rebounds, two steals, and five gianormous blocked shots! It's hard to believe that the Nuggets wouldn't sorely miss the shot blocking of Marcus Camby's departure, but with the Birdman, Nene, Martin, and the surprising glass cleaning ability of Anthony Carter and Dahntay Jones the Nuggets might even be a better shot blocking team than last year with Camby.
Highlights are below and make sure to watch all the way until the end to see Nene brush the teeth of Carl Landry with the game's exclamation point!


Up next for the 12-6 Denver Nuggets in this three-game mini home stand is a look at the Toronto Raptors on Tuesday night. The revenge seeking Spurs come to town on Thursday, so say it with me now...
Go Nuggets!
Posted by Nugg Doctor at 6:57 AM

I still can't believe they called an offensive foul on the elbow play.

The thing about the Rockets is that they can only go as far as their jump shooters take them. Regardless of the Artest trade, they're a soft team. Yao can get a shot off just about any time that he wants, but they're generally turnaround jumpers. It's hard to shoot as high a percentage as Nene will on all the layups and dunks he gets by leaving Yao flat-footed.