It's Nice to Have 'Melo Back 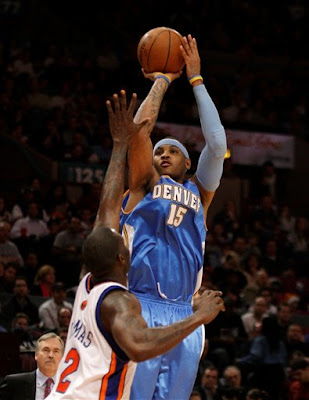 (Boulder-CO) The Denver Nuggets won consecutive games for the first time since mid December by downing the Knicks, 117-110, in Carmelo Anthony's first game back since missing three straight with a sore elbow. As for how the elbow is feeling with a week of rest... I think 32 points, nine rebounds, four assists, and a steal means Carmelo's elbow is just fine!

The Nuggets allowed too many points in the first quarter, but thanks to New York's extremely soft interior defense Denver managed play the Knicks even after one, 27-27. Oh, and you gotta get up to get down as evident by Dahntay Jones supplying the altitude on Tim Thomas.

It wasn't until the second half of the second quarter that the Nuggets started to pull away from the Knicks with their full offensive barrage. The Denver charge was started by reserves Linas Kleiza and J.R. Smith doing what they do best. LK drove the lane and laid in a duece before J.R. hit a long three-pointer in rhythm on the fast break and put the moves on Chris Duhon as he pulled up and hit a ten footer. Carmelo Anthony added 13 of his 17 points at the half in the second and Kenyon another five as the Nuggets finished out the quarter with five free-throws and Renaldo Balkman sticking it to his old team with a steal on the last second inbounds pass to put the Nuggets up by ten, 66-56, at the break.
The Nuggets scored 39 points in the second quarter and for the half scored 42 of their 54 points by field goals in the paint. And it's no surprise when you get that many lay-ups that Denver shot 60.5% from the field in the first half. On the other side of Madison Square Garden, the Knicks made only 5-18 three-point attempts in the first half.
So much for shot selection... I'm all for an offense that likes to get up and down the floor in the way that Mike D'Antoni's clubs have done in the past, but it seemed to me that everyone on the Knicks has the green light to pull the three and it just doesn't work like that it if you want to be successful in the NBA. There has to be some descression used by certain players that just shouldn't have that kind of freedom. However, that's not our problem in Denver; sustaining a certain level of intensity is and in the third quarter the Nuggets really displayed just that.
The third was a bit of a disappointment for me. I felt the Nuggets were a little bit too loose on defense and the extra slack they allowed the Knicks on offense gave New York just the room they needed to start hitting some shots. As a result, New York's five three's in the quarter, including Nate Robinson's go-ahead trey with 1:05 remaining, gave the Knicks new life heading into the fourth down by only four, 93-89. What bothers me about quarters like the third is how the Nuggets play at times as if they can just coast through sections of the game in hopes that when times get tight they will be able to pull it together and put a team away. Today it didn't burn them, but against a more disciplined team than the Knicks Denver may not be so lucky and it's bad habit to have.
Thank goodness for J.R. Smith's buzzer beater from 27 feet because without that shot the Nuggets wouldn't have had any resistence against the New York momentum going into the fourth quarter. The Knicks scored the first eight points in the fourth to take a four-point lead with under nine minutes remaining before consecutive three's by Linas Kleiza and Carmelo Anthony tied the game at, 99-99, with 6:56 remaining in regulation. LK's three was the first Denver field goal in the quarter, but the well-rested Carmelo Anthony had enough left in the tank down the stretch to score another eight of the Nuggets' final 18 points as Denver was able to hold on and win, 117-110.
Six Nuggets scored in double figures including all five starters and J.R. Smith. 'Melo's 32 led the charge followed by J.R.'s 16 off the bench. The Knicks were led by Nate Robinson's 20 points off the bench, but as a team shot 35 three-point attempts and only connected on twelve.
Up next for the Nuggets are the dirty birds in the dirty south tomorrow night. Denver is 3-4 on the second night of back-to-back games so far this season.
Go Nuggets!
Posted by Nugg Doctor at 2:22 PM