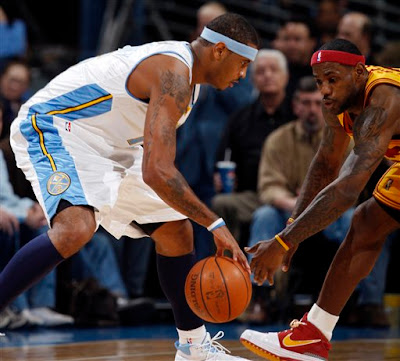 (AP Photo/David Zalubowski)
(Boulder-CO) There just seems to be a few teams that have the Nuggets number. The Lakers, Jazz, and now add the Cavaliers to that list. Denver lost last their first pair of consecutive games since acquiring Chauncey Billups last night to Cleveland, 105-88, but what was alarming about the second loss this season to the Cavs was the way Denver played in front of their home crowd.

All eye's were on Carmelo Anthony and LeBron James in the first quarter. Carmelo opened up things with a three to draw first blood for Denver and LeBron quickly answered with a long jumper , but after Denver relinquished a, 7-6, lead to a King James dunk the Nuggets faded fast. The NBA's top ranked defensive team proved that their early season success was not fool's gold by controlling the Nuggets to just 21 points through one. LeBron scored 14 first quarter points alone and things were out of hand as the Nuggets trailed, 37-21, through twelve minutes.

The Nuggets gained a little traction by way of Anthony Carter accumulating ten of his team-high twelve first half points in the second quarter. Denver buckled down defensively, albeit momentarily, to hold the Cavs to 27 while exploding offensively for 32 to head into halftime trailing, 64-53.

Typically, we have seen the Nuggets regroup defensively at halftime after either allowing too many points in poorly played first halves or refocus offensively and come back out and paste teams with 30+ points in the third, but neither happened against the Cav's. Cleveland completely masked the fact that they only scored 20 points in the third by holding the Nuggets to a season-low single quarter point total of a mere 12 points while extending their lead. I mentioned that it was alarming to see Denver play such futile basketball in front of their home crowd and what I think left such a sour taste in my mouth was after coming into the second half down by only eleven and to cut Cleveland's lead to nine with still 10:30 second to play the Nuggets completely flat lined. Denver went the next 4:50 second without a score as Cleveland methodically re-extended their lead to, 74-57, and the rest of the game was a wash.
The Cavs were content to just exchange buckets with the Nuggets in the fourth, a luxury you have when you play tremendous defense and you've built a lead, to hold on and win, 105-88.

The boxscore is a grim sight for Nuggets fans. Not a single Nugget reached 20 points, not a single starter grabbed double-figures in rebounds, and not a single Nugget handed out more than four assists as the team turned the ball over a combined 19 times. Chauncey Billups scored a team-high 16 points and Chris Andersen grabbed a game-high tying ten rebounds. For the Cavaliers, things were a bit more celebratory. LeBron James played a tremendous all-around game scoring a game-high 33 points while just missing a triple-double with ten rebounds and eight assists. Zyrdrunas Ilgauskas added 23 points and six rebounds on 9-14 shooting and Delonte West finished with 22 points and two steals.

The Nuggets are now 1-2 in this six games in nine night stretch and things aren't about to get any easier. Denver is now in the desert of Phoenix tonight on the tail-end of back-to-back games to face the Suns before a back-to-back set with the surging Trailblazers who could very well be tied with Nuggets for first place in the division when the two teams meet on Monday.
Posted by Nugg Doctor at 8:26 AM