Rockets Blast the Nuggets with Defense 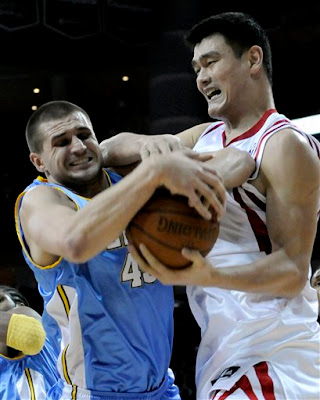 (Boulder-CO) The Denver Nuggets ran out of gas tonight in Houston, 108-96, as the Rockets were well rested and their boosters filled with black powder-performances from their three-headed monster of Tracy McGrady, Yao Ming, and Ron Artest.
What I loved about the first quarter was irregardless of how flat the Nuggets came out of the gates, Denver fought through the bad start and didn't lay down. In years past, if the Nuggets fell behind, 13-2, right from the tip I would know that things were probably about to get ugly. However, this team has more resolve than that and after Carmelo hit two big three's, J.R. Smith took the rock right at Yao for a statement lay-up, and Chris Andersen followed up a missed J.R. free-throw at the end of the quarter with a huge put-back slam the Houston lead was cut to only five, 30-25, entering round two.
In fact, I can't sing the praises of the Birdman and the Prodigy enough for the way they finished up what was otherwise a pretty lousy first quarter overall. After Carmelo hit the aforementioned back-to-back treys, J.R. Smith and Chris Andersen scored the final eleven points in the quarter.
Linas Kleiza and Chauncey Billups got the Nuggets within two after LK connected on a three from the left corner and Chauncey hit his patented pull-up three from the right wing with ten minutes still to play in the half. Then, Nene gave Yao Ming a facial to tie the game and more solid Nuggets defense on Yao in the post fruited a steal and the outlet pass hit LK for a fastbreak dunk to give the Nuggets their first lead of the game, 35-33. At this point in the game, the Nuggets were just out working the Rockets in all facets of play and after a few more great hustle plays and a big three-pointer from Anthony Carter Denver was in command, 42-38.
Something has to be said about the Denver bench in the first half because I don't think the Nuggets would have been leading at half, 61-56 , without the overall effort from the reserves. I've already given J.R. and the Birdman their due, but Linas Kleiza and Anthony Carter also played fantastic in the second quarter. Combined, J.R. Smith (12), Linas Kleiza (10), Chris Andersen (8), and Anthony Carter (3) outscored the starters 33-28 and Smith's three to close out the half cooled the Rockets' jets after Houston went on a 9-2 scoring run to cut the Denver lead to just two with under a minute until intermission.
Once the second half was underway, the Rockets physicality wore the Nuggets down and Denver couldn't maintain offensively on mere jump shots alone. Maybe the Nuggets were tired on the tail-end of back-to-back games against two very good teams, maybe the Rockets are finally getting their pieces back together, but the Nuggets only scored 35 points in the second half (compared to 36 in the second quarter alone) and eventually ran out of gas, 108-96.
The Rockets deserve a lot of credit for completely dominating the Nuggets in the second half defensively. Their size and toughness deterred the Nuggets from attacking the rim and as a result Denver shot just seven free-throws in the half as they connected on just 14-42 field goal attempts. Offensively, Yao Ming led the way with a game-high 32 points and seven rebounds, but the big story was Tracy McGrady's fifth career triple-double of 20 points, 14 rebounds, and ten assists in just his third game back from injury. Ron Artest chipped in 20 points and four rebounds, and did a great job holding 'Melo to just ten points in the second half and 22 points overall.
For the Nuggets, the lack of free-throws really disrupted the tempo of which I believe they are at their best. Denver needs Carmelo Anthony and Chauncey Billups to shoot around 8-10 free-throws per game to really get the most out of their top offensive duo and it also seems like Denver needs those moments between free-throw attempts to get their defensive assignments squared away before hunkering down on the other end. Tonight those meetings were on the fly and 'Melo and Chauncey shot a combined ten attempts from the charity strip. As a result, Yao Ming was consistently open on pick and roll because the Nuggets were never able to figure out who was rotating where and an abundance of wide open three's of which the Rockets shot 45% on 11-24 from behind the arch. Yao would also roll off of setting the screen and the ball would go into the corner giving him just enough to time to get such deep position off of that pass to the corner that it was all but a function for him to lay things to bed.
So, the 17-8 Nuggets lose and their season-high matching win streak of four games is over, but in my eyes there's really no harm done. The Nuggets have until Friday to prepare for LeBron James and the Cavaliers to come to town and, remember, Denver is still yet to lose consecutive games since acquiring Chauncey Billups...
Hey, it makes for a good storyline, doesn't it?
Go Nuggets!
Posted by Nugg Doctor at 5:58 PM

Good night. Are you ever coming to Bloguin?

I wanted to be moved over last week but too many problems with the site layout have put the brakes on it up to this point.