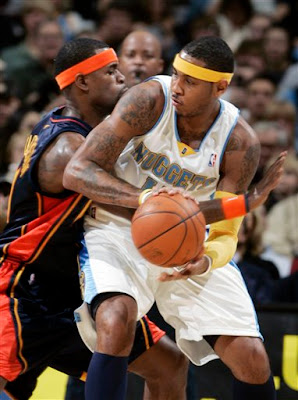 (Boulder-CO) The Denver Nuggets finally did something tonight that they have been prone to allow. Typically, it's the Nuggets who spot their opposition an early lead, but tonight against the Warriors it was Denver who opened up tonight's game with a 13-0 run in the first three minutes and never looked back as they dominated the Warriors from opening whistle to final buzzer, 123-105.
The immediate pounce the Nuggets came out with was tremendous. It all started with Kenyon Martin (playing in his first game back after missing consecutive games with a sprained wrist) throwing down a huge two-handed flush and within a matter of the first five minutes in the first quarter the Nuggets had piled up seven assists on their first seven made baskets.
Golden State did battle back with a 13-3 run to get within two, 18-16, but the Nuggets reclaimed a double digit lead quickly after Chauncey Billups and J.R. Smith hit back-to-back three pointers and the Birdman swooped in for a dunk to end the first quarter with a, 36-22, lead. The Warriors had one last push in the second quarter when Marco Belinelli hit a three to trim the Denver lead below ten points with just over two minutes remaining in the half, but due to the fast breaking Nuggets shooting a blistering percentage from the field it would be the last time Don Nelson's crew would ever remotely be in what became a blowout. And had it not been for the Nuggets missing eight of their 20 free-throw attempts in the first half their, 65-51, lead could have been much larger.
The sizeable halftime lead can be attributed to the Nuggets schooling the Warriors at the their own game 27-6 in fast break points. Denver also dominated the points scored in the paint 38-18 and as a result of all the lay-ups shot 53% (25-47) from the field.
Once the second half was underway it quickly became 'Melo-time again. Fresh off a third quarter for the NBA record books on Thursday night, Carmelo torched the Warriors for 14 points by the end of tonight's third quarter to put the Nuggets up by 25 and thus affording Coach George Karl the luxury of pulling his starters for most of the fourth. The killer instinct displayed by the Nuggets is crucial with this next stretch of six games in nine nights and the scary moment involving Kenyon Martin landing awkwardly on his right side was the perfect example of why the Nuggets need to take care of business when they have a team on the ropes.
Carmelo Anthony scored a game-high 27 points, but just missed his eighth double-double of the season with nine rebounds, six assists, a pair of steals, and a block. Chauncey Billups did record his third double-double of the year with 16 points and eleven assists, and J.R. Smith and Kenyon Martin each finished with 15 points. All eleven Nuggets grabbed at least one rebound and Denver out blocked Golden State, the league's top shot blocking team, 12-5 with Chris Andersen rubbing out a game-high four Warrior shot attempts. The Birdman currently ranks third in blocked shots per game behind Dwight Howard and Marcus Camby with an average of 2.38 rejections nightly and is tops in the league with 6.67 per 48 minutes.
Up next for the Nuggets is a Texas two-step on back-to-back nights starting with Mavs on Monday followed by the Rockets on Tuesday. Denver plays six games in the next nine nights against teams that are a combined 77-39, including a rematch with the 20-4 Cleveland Cavaliers at Pepsi Center, their first look at the Suns in Phoenix, and a home/away back-to-back set with the division rival Traiblazers before Christmas.
Currently, the 16-7 Nuggets are in sole possession of first place in the Northwest division with a two game lead on both the Utah Jazz and Portland Trailblazers who are 15-10 overall. Only the Los Angeles Lakers have more wins with fewer losses in the Western Conference as the Nugget improve to 15-4 since trading Allen Iverson for Chauncey Billups.
Go Nuggets!
Posted by Nugg Doctor at 8:36 PM