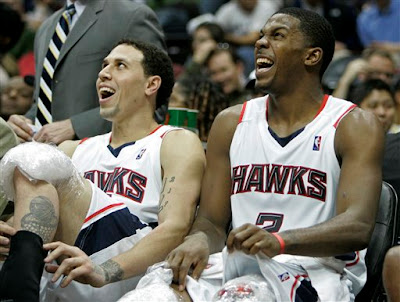 (Boulder-CO) After hanging tough with the Atlanta Hawks for a half, the Denver Nuggets decided to play pick-up style basketball and as a result were embarrassed in the dirty dirty, 109-91. For some reason, this team forgets how to play as a team from time to time and the results are never favorable. Against the Hawks in the second half, Denver only accumulated seven assists as they were outscored, 55-38.
Things weren't all that bad in the first half despite the news that Nene would not play due to a sore neck stemming from the previous game in New York. Regardless, the Nuggets traded baskets with the Hawks in what was a very uptempo feel to an otherwise great first 24 minutes of action.
The Nuggets problems started in the third quarter when the ball stopped moving and the jumpers wouldn't cease. It also didn't help that every time the Nuggets would put together a solid defensive stand the Hawks would connect on a three from the club level. And as demoralizing as playing good defense is just to have the opposition hit a Hail Mary from deep, the Nuggets didn't do themselves any favors in pick and roll situations. The big men on this team just don't hedge strong enough and the result last night was Hawks shooting a combined 12-23 from the three-point line and 38-78 from the field overall.
And to be honest with you...
I really have a hard time watching this team when they stop sharing the ball. I channel surfed the latter half of the third period and throughout the fourth checking in on other games from around the league (God, I love League Pass) because it's so frustrating to watch a team so good collectively abandon fundamental team concepts. Maybe my patience is waning as I get older or perhaps it's just because I have such lofty expectations of this team, but either way, watching this team play a modified playground style is like sticking a pencil in my hand while trying to tell myself it doesn't hurt.
The results were, shall we say, less than favorable for the Nuggets. Carmelo was an ill 4-17 from the field for only 16 points while grabbing four measly rebounds and handing out three assists. Chauncey Billups had a less than efficient night offensively too. Billups finished with eleven points on 5-11 shooting, but handed out just five assists. Chauncey's long distance stroke has also been off lately as he has connected on just six of his last 30 attempts from downtown, including just 1-4 against the Hawks.
About the only Nugget who played well on the offensive end was Kenyon Martin. K-Mart scored eleven of his team-high 19 points in the second half with most of those buckets coming by way of aggressive moves towards the basket. Unfortunately, scoring was the only aspect of Kenyon's game that showed up as he grabbed just three rebounds and didn't block a shot.
Collectively, the Nuggets cleared just 18 defensive boards and 27 rebounds total in comparison to the Hawks 15 offensive rebounds which were instrumental in Atlanta dominating the glass, 44-27. And to depict the rebounding disparity even further, Chris Andersen led the Nuggets with just six boards in his first start of the year.
Up next for the Nuggets is somewhat of a trap game tomorrow night against the Raptors in Toronto. The last time these two teams faced each other, Toronto was embarrassed by Denver at the Pepsi Center in a game that prompted the firing of Sam Mitchell. There's no doubt in my mind that Toronto hasn't forgotten that game and will be loaded for bear and looking for revenge this time around. And without Nene, who's status is still up in the air, the chances of a Nuggets victory get that much slimmer. One thing is for sure though, Nene or not, if the Nuggets do not share the ball they will almost certainly lose.
Posted by Nugg Doctor at 9:28 AM