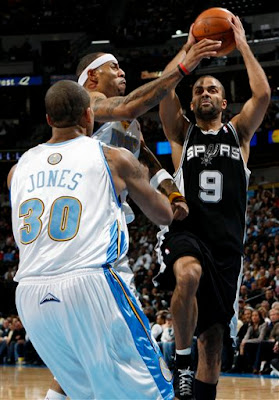 (AP Photo/David Zalubowski)
(Boulder-CO) In the national T.V. spotlight, the Nuggets played their worst game since acquiring Chauncey Billups who, prophetically, was quoted after the Raptor blowout as saying, "It's just one of those games where it seemed like everything kind of worked, throughout the season you usually get two or three of those games. Unfortunately, you usually get two or three on the other side, those games where nothing really works." And he couldn't have been more accurate about tonight's, 108-91, thrashing the Nuggets took at the hands of the Spurs.

I think the words "funky" and "stale" sum up the entire first quarter. Denver was uncharacteristic of offense and deplorable on defense. On one end of the floor they were chucking up jumpers off of the first pass and on the other Matt Bonner was scoring nine first quarter points.

I repeat, "The Red Rocket" torched the Nuggets for nine points in the first quarter. Sheesh!

After allowing the Spurs (a team that barely cracks 90 points on average) to score 30 points in the first quarter. The Nuggets followed up their first twelve minutes of putrid defensive effort by allowing San Antonio another 31 points in the second. Adding insult to the injury was the officiating (more on that later) and the futile 15 points offered offensively by Denver on 24% shooting in the quarter of which left the Nuggets down, 61-41, at the the half.

The third quarter saw a very aggressive J.R. Smith and frustrated Carmelo Anthony try to spark a Denver comeback, but their efforts fell short as they closed what was once a 23-point San Antonio lead down to 15 with under a minute to play. J.R. took the ball to the hole on three-straight touches during the Nuggets' run scoring on an acrobatic lay-up and an old fashioned three-point play before missing both free-throws on the third take. But tonight was one of those nights when every time the Nuggets would get something started there was always something to slow their momentum.
Manu Ginobili proved to once again be a thorn in the Nuggets side with well-timed three's to end the third and to start the fourth and with Tony Parker and Tim Duncan not looking like they ever skipped a beat the Nuggets were out of answers.
After scoring 14 points in the first half, Parker finished with 22 points and eight assists while Time Duncan added a double-double of 21 points, 12 rebounds, seven assists, five blocks, and a steal for good measure. Manu Ginobili was the third Spur to score 20+ points matching Duncan's 21 on 4-7 from downtown.
J.R. Smith recorded his first double-double of the season with 15 points, ten rebounds, and four assists in what was otherwise a very lean boxscore for the Nuggets. Carmelo led all Denver scorers with 16 points while Kenyon Martin, Nene, and Chauncey each added a dozen in what was otherwise a very selfishly played game offensively. In fact, the Nuggets collectively handed out a measly 19 assists without a player handing out more than four dimes individually.
And now I have a bone to pick with the officiating crew and more specifically, Mike Callahan. How can you reward the kind of antagonistic defense played by Bruce Bowen with four offensive fouls on Carmelo Anthony and the whining of Tim Duncan with some of the softest whistles on Nene that I've ever seen? After you spiked Carmelo with a technical foul in the second quarter on countless times it seemed like you had it out for the Nuggets. And while Denver didn't have what it realistically was going to take win this game it didn't help that the had to fight the three of you for 48 minutes as well!
On that note let's be thankful that this one is over and the Nuggets are back in action on Saturday night when they travel to Sacramento to take on Kevin Martin and the Kings. The good news is Denver has still yet to lose consecutive games since acquiring Chauncey and it's not likely they will end that streak against the 5-15 Kings.
Go Nuggets!
Posted by Nugg Doctor at 10:17 PM

That was actually JR's second double-double of the season -- he had another one against the Clippers (17 and 10 boards).

I got surprise club level tickets to this one. I'm glad they were free, because this game was incredibly frustrating to watch. Chauncey hits that ill-advised pull up shot more than anyone in the league, but I still hate him taking those when he's not "feeling it".. there were several of those early that seemed to set the tone for the lack of ball movement and quality shots that pervaded the first half.

Another thing I'll never understand is using Chauncey and AC together (aside from against teams like Dallas who run a twin-PG setup with Kidd/Terry). It's redundant to have two sub-6'4" ball-handling defenders on the floor at the same time. AC is a liability on offense and gets no pressure from the defense, allowing the opposing PG to ball-hawk and help wherever it's needed, and his passing and ball control skills are wasted when Chauncey is holding the ball most of the time and AC is trying to work off the ball.. it just makes no sense to me when we have 2 real SGs on the roster in JR and Dahntay who are both capable defenders (Dahntay at a higher level, obviously).

Ah well, I think that was just one of those games... that first quarter and all those mid-range shots falling was what buried us.. it's nearly impossible to recover a huge deficit like that against the Spurs. Our offense was absolutely horrendous in the first half as well, but they were just canning everything and it seemed to break our defensive spirit a bit.

But yeah, we should wallop the Kings (they're playing horribly right now) and get back on track.