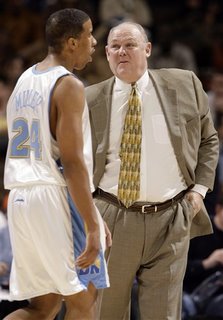 (Boulder-CO) Memphis breaks a seventeen game winless streak at Pepsi Center. The Nuggets five game winning streak is over. Memphis is no longer winless on the road and I am at a loss for words. I know my prediction was bold, but I also knew that the Nuggets were capable of this kind of breakdown. Memphis beats Denver tonight 108-96 in what was by far the least inspired game the Nuggets have played this season. Send the hate mail, I’m ready for it.
The Memphis Grizzlies did exactly what I didn’t think they could do and outscored, out rebounded, shot better than, and out passed the Nuggets. The Grizzlies made a killing in the paint by breaking down the Nuggets for 62 points while attempting 92 total field goals. When Coach Karl was asked about the Nuggets loss he said, “We were standing, watching, and playing bullshit NBA basketball.” A direct quote from Altitude Sports and Entertainment’s live broadcast of George Karl’s press conference which pretty much sums up my feelings perfectly.
Defensively the Nuggets were like a soggy paper bag. Easily ripped wide open by dribble penetration and unable to keep any sort of defensive formation. Players chasing their man, buying head fakes, and very little boxing out left the Nuggets without any chance to start the fast break. I don’t know how to say it any differently other than this one was just bad. Forget any analysis because the Nuggets played as if they just didn’t want to win.
Carmelo Anthony scored 37 points on 17-30 shooting with nine rebounds and seven assists. Marcus Camby was the only other Nugget player worth mentioning with a double-double performance of 14 points, ten rebounds, and three blocked shots.
Finger pointing would be redundant. If you want to point one, point one at me for jinxing yet another game just when I thought I was starting to really figure this team out. The Nuggets need forget that this one ever happened and get ready for Timberwolves on Friday night.
Posted by Nugg Doctor at 8:53 PM

Hey, it's a long season. The Nuggets weren't going to go undefeated the rest of way!! I think what is more important is how they respond to this loss. True these are the games you look back on come end of season and home court advantage situations, but no win is ever as good as it looks, ie, beatiang the Clips without thier guns, and no loss is ever as bad as it looks. Albeit, last night was ugly in every way. Which J.R. will emerge is the biggest question right now, cuz Melo can drop 37 in a losing effort all year!!

You're exactly right about the losses and the wins not always being what they seem.

What Melo did last night was amazing though. He didn't play as well as he could have, missed some shots, and was basically out of the grove, so to speak. How he still ended up with 37 is a true testament to his scoring versatility because the outside jumper was having an off night.

Defensively, you can't front him because he will alley-oop on you. If you let him get to far down low, it's as good as dunked too. The only way to defend 'Melo is to have him miss shots out in front of you and box him out. And even then sometimes he is too strong on the glass.

Geez, that was rough to watch. One thing that's been interesting is that the Nuggets have lost games to the worst teams they have played, all at home (except the first Clips game) -- New York, Minnesota, Memphis...

It doesn't make any sense unless they're just losing focus mentally and thinking it will be a cakewalk. I definitely think that happened with the Grizz game. They've gotta start taking these lesser teams more seriously -- they shouldn't have lost to any of those teams, but managed to piss the games away somehow. I think focus is going to be a big issue for this team this year -- they need to stay on the ball. I think a trade for some more veteran leadership would be a ngood thing -- Marcus can only do so much.

And yeah, hopefully J.R. doesn't come out like this too many more nights. I don't want Karl to get impatient with him and end up benching him for Yak or something -- that would be a disaster. Yak did play well in the Grizz game though -- he's just not the threat that we need on offense, and I hope George realizes that so he'll be more patient with J.R. (especially his defensive lapses)...

Ah well, bring on the Wolves. Hopefully the Nugs take them more seriously this time and can pull out the road win.