‘Melo Made Example of in Loss 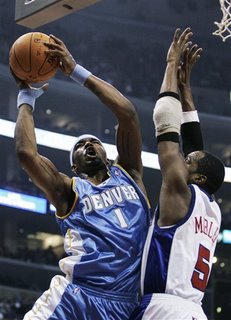 (Boulder-CO) The Denver Nuggets suffered an opening night loss tonight 96-95 to the Los Angeles Clippers. The officiating played an overbearing role down the stretch, and in my opinion, aided the Clippers at critical junctures of the game. I know, I know… sounds like sour grapes, but hear me out on this one. I think the NBA needs to establish more clear cut rules for this new hair-pinch trigger technical foul policy because tonight it was not clear to me why one technical was called and not another.

Carmelo Anthony was ejected in the third quarter after frustration led him to remove his head band and toss it in front of the bench after being substituted for. The referee took this as disrespect and gave Carmelo his second technical foul of the game. At this point in the game I can understand why Carmelo was tossed. He had been jawing with the referees quite often during the game and had already been issued his first technical shortly beforehand. He gave the official the opportunity to make an example of him and he did. Now on to why I’m griping at nausea.

Late in the fourth quarter the Nuggets found themselves down by one point with about twenty seconds remaining. J.R. Smith and Yakhouba Diawara apply full-court defensive pressure and Sam Cassell coughs up the ball during a spin at about half court. J.R. snatches the loose ball and glides down the lane and puts the Nuggets back up by one with the jam. The Clippers then call timeout and Cassell pleads his case with the ref for a good thirty seconds before having to be wrangled back to the Clipper bench by teammates.

So my question is why wasn’t Cassell issued a technical foul? Under the freshly instated crackdown on complaining and showing up the officials I would have thought that this was grounds for T-time. However, Cassell got corralled and the game went on with the Nuggets eventually losing. Whether or not these events would have dictated a change in the end result for the Nuggets is debatable, but it was blatant to me that the rule was not enforced straight across the board. It’s a shame I know, but hey, that’s life and it should serve as a learning experience for Carmelo. The lesson is simple; do not give the referee an opportunity to determine your own fate.

Now on to the game and some statistical analysis. The aspect of the game in which I think played the most detrimental role in this loss was the Nuggets inability to heat up from three. As a team the Nuggets shot a dismal 4 of 23 from long range and finished with a 38% field goal rate for the game. Bright spots for the Nuggets were the play of Marcus Camby and Nene. Marcus gave the Nuggets 16 points, 18 rebounds, four blocks, four assists, and a steal in a full night worth of action. Nene also looked good in his fifteen minutes of playing time. He gave the Nuggets ten points and seven rebounds in quick contribution.

Fortunately the Nuggets get to erase game one from their memory by hosting the Timberwolves tomorrow night at Pepsi Center. Hopefully they can eliminate some of the unnecessary mistakes of tonight’s game and be victorious on their home floor. Tip-off is set for 7 pm, so keep yourself posted up big at The Nugg Doctor.

Ugh, this new emphasis is already out of control. The technical that Francisco Elson got in the Spurs game was evem nore ridiculous than 'Melo's first one in this game... These refs need to reign themselves in and know that it's not their job to influence the results of games, but rather to ensure fair play.

It's not fair play when one guy can jaw at the officials like crazy while another gets tossed for far less. I made the exact same point about Cassell last night -- because he's a veteran and has a reputation for jawing with the refs, he'll get away with it all year. The second a guy like 'Melo (or K-Mart, or J.R.) says anything, he's getting the technical.

I dunno, I thought it would be a good idea a tthe beginning of the year, but it really slows down the pace of the game and definitely influences the outcome to a much higher degree than is reasonable. Favoritism is going to run even more rampant this year -- get ready for 50+ free throws from every decent penetrating guard in the playoffs and games decided by stars getting ejected.

In other news, Marcus is a beast. I hope all the guys can keep their cool tonight so the damn refs can't stick their noses into another outcome. And hopefully they can get some shooting from someone other than J.R. -- he did look good last night though.

I disagree about Cassell. I feel like the referees are more lenient at the end of games, especially close ones. There's no problem with this. Tempers are going to flare when you're talking about a see-saw game in the final minute. The referees tend to swallow the whistle anyway at the end of games, so the same logic should apply with Cassell. Like it or not, games are called differently at the end of a close game than at the beginning.

Had Cassell been called for that technichal, the argument would have been that the game was decided on a silly T. Either way, I guess the referees can't win.

First let me say that your disagreement is always welcome on The Nugg Doctor. Other perspectives are what make this exchange of ideas great and I appreciate the outlook.

However, you say that referees tend to swallow their whistles towards the end of games, but in last night's affair the referee decided to call a shooting foul in the waining seconds on Yak when he clearly was in proper defensive position when Cassell decided to pull up and shoot.

If there was any foul in that play it would of been on the floor prior to the Yak putting his hands up in the air in an attempt to prove that he wasn't holding Cassell.

Anyways, I agree that the referees call the game differently at different times throughout the course of a game, but in last night's action it would have appeared that the Nuggets took the short end of the stick on both occasions in question.

Thankfully, this is game one of 82 and probably will be a distant memory sometime next week.


Personally I like the new rule. The NBA has a right to control its product based on what the fans want. And I believe the fans really wanted this change for about 12 years now. Not that the fans are always right, but they are in this case.

I do think the refs need to be more consistent. And Cassell should have gotten a call no matter how much time is left.

Pizzadahutt is back folks, be afraid, be VERY afraid!