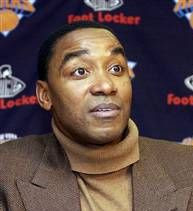 (Boulder-CO) First let me say that I agree with all the suspension lengths for all those involved and applaud Commissioner David Stern for his strong stance on this situation. The only problem is that he left out the biggest goon of them all. Isiah Thomas. Carmelo will serve his time and I believe that he is truly remorseful for his actions, but to let Thomas off the hook is the most despicable action, or lack there of, that could have been concluded after all the video was analyzed. There was, and is now, not a doubt in my mind that Isiah is a classless individual regardless of his accolades as a player or his involvement with this league. Don’t ask me to comment further. Imagine the worst tirade you could go on and then multiply it by ten fold to comprehend the way I feel about Thomas. One thing for sure is that he will NEVER be an installment of Historical Glimpses!
The suspension lengths are as follows:
-Denver Nuggets-
Carmelo Anthony: 15 games*- Return set for January 20, 2007 vs. Houston
J.R. Smith: 10 games- Return set for January 8, 2007 vs. Milwaukee
Nene: 1 game- Return set for December 20, 2006 vs. Phoenix
-New York Knicks-
Nate Robinson: 10 games- Return set for January 10, 2007 vs. Philadelphia
Mardy Collins: 6 games- Return set for December 31, 2006 vs. Los Angeles Clippers
Jared Jeffries: 4 games- Return set for December 27, 2006 vs. Detroit
Jerome James: 1 game- Return set for December 20, 2006 vs. Charlotte
Isiah Thomas: ZERO games!!
*Due to stipulations in the NBA Collective Bargaining Agreement, Anthony can attempt to get his suspension of games lessened through arbitration because it is longer than 12 games.
George Karl had this to offer in today’s article on http://www.espn.com/, “It was directed by Isiah,” he said during a shootaround. “I think his actions after the game were despicable. He made a bad situation worse. I'll swear on my children's life that I never thought about running up the score. I wanted to get a big win on the road” The rest of the article is viewable here: http://sports.espn.go.com/nba/news/story?id=2701228.
Both teams also recieved a fine of half a million dollars for the classless display.
Good grief, gentlemen. Once again, it boils down to what is accomplished after people come to fisticuffs. Nothing!
Posted by Nugg Doctor at 1:18 PM

Happy to have that all sorted out. (Although I agree with you about Isiah). I guess it's rougher for you guys, having Melo out for 15. Let us shake hands over the bloody chasm and hope the two franchises even things out with eachother.

No question about it, Seth. The Knicks, and no offense to you personally, are garbage. The Nuggets on the other hand are a team that is trying to breakthrough into the upper echelon on the NBA. This loss to the Nuggets is going to hurt their franchise much more than what the Knicks are losing.

The thing that I find so oxymoronical is that Nate Robinson, Mr. "They were trying to embarrass us", is a total hypocrite. It was his stupid self that tried to bounce a ball off the floor in an attempt to alley-oop himself in a previous game. It is apparent that this little buster has no clue about sportmanship and would do the league a big favor by just shutting his mouth on the topic!

On any other day I'd go to war with you over Robinson, but...definitely not today.

If anything, the Knicks will get a little flame under their asses and start putting out more effort following this incident. It's either that or the status quo, cause I don't think they can get worse.

P.S. Yo, step off. (That's my obligatory half-assed attempt to defend my home team.)

And unlike the Nuggets or the Knicks, I can also just leave it at that! Your comments are great and I enjoy your readership greatly because of your humor and analysis.

Can I ask for some advice Nugg Dr? Normally when I have a conversation with my friends, I laugh and have a big sense of humor. But just at 5:02 pm Mountain time, Kevin Pereira and Olivia Munn of G4's "Attack of the Show" said "I'm gonna punch you and then run away, It's called the Carmelo"
Can you help me with that?

Also, why do the National media seem to pick on the Nuggets and hate them more when something bad Happens.

I mean i'm 22 years old but when it comes to the Nuggets, I don't play.

Well, as far as the "Carmelo"... I kinda think that it's funny (God, I mean, it's been tense lately)! I mean he did pop Mardy on the chin, stumble him, and then back peddle past half court. It's fitting.

As for the national media playing the Nuggets like some pastaroni and cheese when they are like a filet mignon and shrimp... I don't know, your guess is as good as mine.

You don't have a war vet uncle named "Strawberry" do you?

Ha thanks, like I said,i'm 22 years old but when it comes to the Nuggets, I don't play.

Did you understand my reference?

Hey 1 more thing for now.
Have you seen this video of Karl on this situation.

Yea, I have seen it. It doesn't excuse any of the actions taken in Saturday night's circus, or lack there of, on Stern and the NBA's behalf.