You Will be Missed 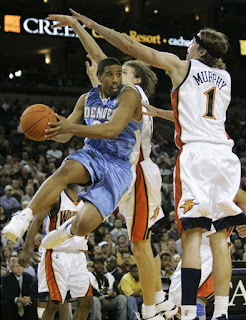 (Boulder-CO) As a long-time, die-hard fan of the Denver Nuggets, I feel that I am obligated to send Andre Miller off with a heart-felt message from The Nugg Doctor. He has been a pleasure to watch, a consumate professional, an iron man when it comes to consistency, and is going to be missed, while being remembered, by Nuggets fans.

Andre Miller is the epitome of a pass first point guard and one of the last of a dying breed. His mild mannerisms and soft spoken personality are not what our culture highlights, but he embodied everything associated with team concept. From his days being coached by Rick Majerus at the University of Utah, to leading the NBA in assists with the Cleveland Cavaliers, to his last gutsy performance as a Nugget, Andre Miller was, and is, one of my favorite players.
The Nuggets will sorely miss his alley-oop passing and his never tiring motor that was the energy propelling this team for the last three and a half years. The number 24 will always remind me of Andre Miller and his classy years with the Denver Nuggets. Andre, you will be missed and never forgotten by the fans in Denver. Best of luck to you in what ever the basketball Gods have in store for you, your family, and friends.
The NBA is a business, and in business, things have to change. The optimistic way to look at this is that hopefully things are going to change for the better for Andre Miller, and his career, as well as for the Denver Nuggets.
Posted by Nugg Doctor at 1:41 PM

Yeah, add me to the list of people who loved Andre in Denver. It's the end of an era and the beginning of a new one -- let's hope that this will turn out to be a mutually-beneficial trade. Hopefully Andre can dish some pretty alley-oops to the only AI left in Philly. I'll be rooting for him.

And yeah... wow, I still can't believe this is happening. I hope he'll be in uniform pretty soon, as I have tickets for tomorrow night against the Suns.

Got a spare ticket for sale?

My thoughts exaclty, Nugg Dr. Andre was/is one of my favorite players. Hopefully we won't miss him too badly.

I'm actually going to the game on Friday, and I'm a lot more excited than I was after the fight.

anyone, got a spare for sale? Chance to have "The Nugg Doctor" buy ya a beer...

Classy tribute to Andre Miller, one of the best and most unappreciated point guards in Denver history.

Nuggets' fans have to love the quality.

Curious to watch him like people look at car wrecks.

Who takes the shot at the end of the game now, something Carmelo Anthony was so good at?

Make no mistake, this IS Carmelo's team and I am sure that the Nugget management has already had this little talk with AI.

Hey Nugg Docter. Nice blog, you must feel great about nabbing Iverson, despite giving up Miller (how cool is the combination of "the best lob-passer in the nba" and "the best dunker in the nba", iguodala). keep up the blogging, I love it.

The nuggets are quickly becoming one of my favorite teams, now with a Phoenix-suns-esque starting five.

A true professional indeed (as you Nugg Dr.). Let us not forget true inspiriation.