Burned by the Rockets 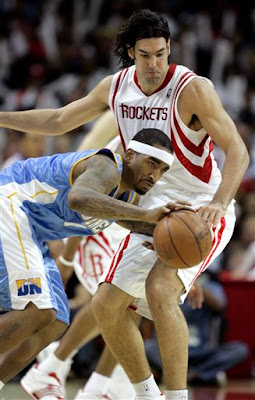 (AP Photo/Pat Sullivan)
(Boulder-CO) Here’s five things you need to know about this time of year in the NBA and how it relates to the Denver Nuggets and their shameful display last night against the Rockets.
1. This is the time of year that TEAMS come together. In the case of the Rockets, they just lost their sole All-Star, but yet they have come together as a team since the bad news relating to Yao Ming and have won the last three straight games sans the big man. In the case of the Nuggets, they just looked like a bunch of individuals, again, and as they all struggled so did the team. Denver lost this game, 113-89, and didn’t even look as if they had played together for five games let alone 58. Item of note: George Karl sat there and did nothing, as he has for the last four months.
2. This is the time of year when a team’s defense should be at its strongest. In the case of the Rockets, they held the usually high-scoring Nuggets to 89 points and deserve to savor their defensive efforts as they kept the third and fourth best scorers in the league under 20 points each. In the case of the Nuggets, they couldn’t stop a slinky from falling down a flight of stairs. Denver allowed five double figure scorers led by Tracy McGrady (22 points, six assists, and six rebounds) and Shane Battier (20 points, five rebounds, three assists, two blocks, and a steal). Furthermore, the Nuggets were only able to hold the Rockets to fewer points than they themselves could score in one measly period and did so by only a single point in the third quarter. To add further insult, they gave up 30 and scored 31 (twirls finger in air in sarcastic disgust).
3. This is the time of year that a team’s offense should be at its strongest. In the case of the Rockets, they scored well above their season’s average and handed out 23 assists. Houston also shot 49% from the field. In the case of the Nuggets, they managed to only get 79 shot attempts off and connected on only 33 of them. Somebody tell the Nuggets that the jump shot does not love them. Carmelo and AI combined for an ugly shooting night consisting of 14 makes and 25 misses. It should also be noted that the Nuggets continuity could be at an all-time low. Denver handed out a mere 19 assists last night probably because when the ball was passed it was such a foreign object to those not wearing #3 or #15 that they immediately hoisted their own shot attempt not knowing when the next time they might see the spherical, leather, pebbled object again.
4. This is the time of year that everyone on the team should rebound. In the case of the Rockets, they had ten players grab at least one rebound with Luis Scola leading the team with 14 boards. Additionally, four other Houston players grabbed at least five rebounds. In the case of the Nuggets, only eight players grabbed at least a single rebound and only three players snatched five or more boards. Kenyon Martin led Denver with ten rebounds, but the Rockets won the battle of the boards 44-40.
5. This is the time of year that a team with something to play for raises their intensity to achieve their goals. In the case of the Rockets, they have a playoff position on the line and they have risen to the occasion to do everything in their power to maintain said position. In the case of the Nuggets, they lose to mediocre at best Eastern Conference teams, and couldn’t look less inspired when taking the floor in an air tight divisional race while currently on the outside looking into the current Western Conference playoff picture.
With those five points fresh in your mind, let me say this: I can’t, won’t, and don’t plan on watching many more Nuggets games in their entirety this season if after the first half this team looks, acts, and plays like a dog that has had its spirit broken. I’m not sure what the hell is going on with this team right now, but the problem better be remedied quick or this week’s worth of games is going to put the Nuggets out of playoff contention for good and the $%!# is going to hit the fan.
Go…Go…Go figure out what the problem is and stop wasting two and a half hours of my life every other day!
Posted by Nugg Doctor at 10:46 AM

I don't even know what to say. I'm tired of making excuses for them.

I forced myself to watch the entire game down to the last second, but I agree. They're not giving 100%, as a fan why the hell should I?

I am extremely worried about the upcoming stretch. We could end up hanging out with Portland in the standings. Heres hoping to a Phoenix collapse.

I was reading the ESPN power rankings for the Nuggets today (dont ask me why i do because it just pisses me off) and it quotes GK where he says that this time last year the Nuggets were 1 game above 500 and they thought that they were ok, but now they are 11 games over 500 and they are worried. Interesting perspective because we all beat up the Nuggets and expect a lot out of them but they have improved from last year, at least record wise, but the West is so strong this year. This years playoffs will be one to remember and lets hope the Nuggets can be part of the Good memories.